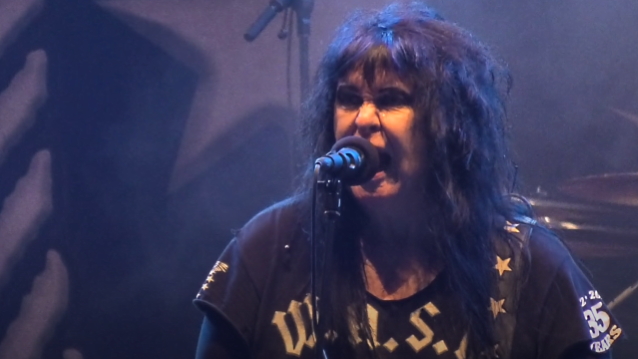 W.A.S.P.'s BLACKIE LAWLESS Says He Was 'One Of The First People' To Contract COVID-19: 'It Took Three Months To Shake It'

During an appearance on this past Wednesday's (January 12) episode of SiriusXM's "Trunk Nation With Eddie Trunk", W.A.S.P. leader Blackie Lawless revealed that he "one of the first people [who] contracted" COVID-19, the disease caused by the SARS-CoV-2 coronavirus. He recalled (as transcribed by BLABBERMOUTH.NET): "It was kind of a bizarre thing because… [METALLICA's] James Hetfield was having a showing at the Petersen [Automotive] Museum here in L.A. for his cars [in January 2020]. And I hadn't been anywhere in quite some time. So I thought, 'Okay, I'm a car guy.' So we went down to see the cars. What we weren't anticipating when we got there is that — we found out later — it was the single largest event in the history of the Petersen Museum; there was, like, a thousand of people there and a lot of fans. So as soon we walked in the door, it turned into a little bit of an in-store appearance — and so, people wanting photos and just to say hello and things like that. Well, when you're taking photos and all that, everybody gets up close and everybody's breathing on everybody else."

He continued: "So we go to the show, everything's fine. About a week later, I started feeling kind of tough. A couple of days into it, I thought, 'Well, I've got the flu.' Well, about four days in, which normally you would start feeling better, I wasn't. So I thought, 'Well, tomorrow I'll feel better.' The next day I got up, I was worse. And I thought, 'Well, this is a bad one. I'll be better tomorrow.' The next day I was even worse than that. This goes on for about seven or eight days. And I'm getting at the end of my rope and I'm thinking, 'What the hell is this?' Then I lose my taste and smell and all that; that went on for two more weeks after that. But we don't know what this is because there's no name for it yet. It was the end of January in 2020. So then I started getting better, but it goes on for weeks and weeks. And so we didn't know what it was. Then we started hearing this rumbling that there's something out there with this funny name on it. So, about three months in… It took the better part of three months to really shake it."

In the U.S., more than 62% of the population are currently fully vaccinated against the coronavirus, while more than 74% have received at least one shot, according to data from the Centers for Disease Control and Prevention (CDC).

More than 849,000 people have died from the coronavirus in the U.S.