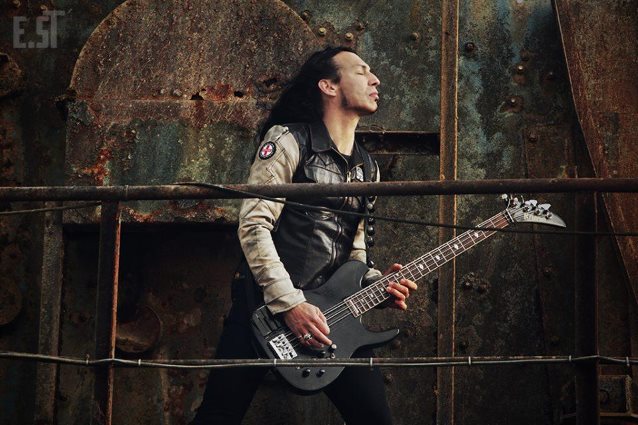 Blundell charted the songs in writing from recordings — and the duo had one chance to play them during soundcheck.

"I originally dreamed up the GX to allow my bassist to add some second guitar presence in our power trio, along the lines of RUSH and KING'S X," states Blair. "When I moved away from my bassist, I decided to give it a shot — to apply my guitar playing to it — and it's been a wild ride with many awesome drummers along the way! Prior to rejoining W.A.S.P. in '06, I hadn't been playing lead guitar actively for eight years! And that was actually a blessing in disguise, as I was then able to formulate a lead style that really fit the band, not only my noodling compulsions."

"Playing with this guy was half terrifying and half orgasmic — after watching him perform to a sold-out Belasco Theater in L.A. with Steven [Wilson], and being blown away — I was amazed to hear that he'd visit our program for a clinic. I wrote to him, and the bloody chap agreed!"

The event was sponsored by Roland Scandinavia and Rock Academy Finland, and is part of RA's series of free weekly events held to inspire young musicians. Blair, who has held many such clinics throughout Finland and Sweden, relocated from Boston to Turku to be involved in this progressive culture ministry-financed program. Here, he also coaches bands on touring and live performance, gives private lessons, and mixes FOH sound at clubs and festivals for the RA groups, many of which have released CDs and secured management/recording deals.

"Working with these ambitious young musicians and their energetic bands reminds me of our club days in Boston, treveling hours to see EXTREME in the clubs, building our confidence to do auditions and push our own bands," continues Blair. "There is a strong audience for rock and metal here — and Craig's infectious energy and talent reminds me why I still do this!"

In late summer, W.A.S.P. is slated to release the "Re-Idolized" 25th-anniversary CD and movie (Napalm Records) — revisiting and celebrating the group's iconic 1992 "Crimson Idol" record — which Blair auditioned for, joined and toured behind in that same year.

"This record has become the soundtrack of my musical life and career," says Blair. "25 years ago I was a kid with as many dreams as I still have, but with a new double neck guitar that won me the slot for that '92 tour — 64 shows of nirvana! It's amazing that we'll be able to go out and tour behind this exciting and unique re-release, and I'll play these same guitars that are still kicking ass!"