Sheptone celebrates a milestone for one of rock 'n' roll's most recognized anthems and albums with the release of WARRANT "Cherry Pie" 30th-anniversary limited-edition regular nickel-plated electric guitar strings. Handwound at tensions and speeds designated for optimal performance, these strings sound "so good they make a grown man cry." In light of Sheptone's history with the band and this joyous occasion, the limited-edition "Cherry Pie" strings deliver an iconic tone that will put smiles on faces 10 miles wide.

The single "Cherry Pie" and its album by the same name are permanently cemented into the history of rock as one of the all-time best, standing out as a rare album that can be listened to from beginning to end without skipping a track. While "Cherry Pie", "Uncle Tom's Cabin", "Blind Faith" and "I Saw Red" were chart toppers, Sheptone's Josh Vittek prefers the guitar-laden tracks of "Sure Feels Good To Me", "Mr. Rainmaker" and "Train, Train".

"Over the years, I have continued to support WARRANT through many brands I have represented during my career," said Vittek, who today runs VittekPR, an industry public relations agency in addition to Sheptone. Vittek approaches artist-endorsed products as he does artist relationships — with the time, effort, and care required. He worked with WARRANT on the specifications and measurements for the six-string package, gauged at .010, .013, .017, .026w, .036w, and .046w.

Vittek's history with WARRANT dates back to 1990, when their platinum album "Cherry Pie" debuted. As the band rose to fame in the Los Angeles club scene, Vittek was finishing high school in Southern California. He began his career in the music manufacturing industry on the factory assembly lines of San Diego-based Carvin Corporation, which made the '80s classic X100B guitar amplifiers and speaker cabinets that WARRANT endorsed. Since Vittek first connected with WARRANT lead guitarist Joey Allen, the two have formed a working relationship around instruments and gear, and a friendship that has stood the test of time.

"When you work with someone that long and trust them to help you with your instruments/gear, you are trusting them to be a part of you musically," Allen said, adding that Vittek is a "relentless perfectionist" with a "never say die" attitude that's reflected in Sheptone strings down to the core. From the first time Allen strung his GMP guitars with Sheptone strings, he could tell the difference.

"Sheptone strings ring louder, cleaner, hold tuning better and last longer than any string brand I have ever tried — and I have tried many," Allen added. "When Sheptone approached the band for an anniversary set, it was a no-brainer. Try a set and hear the difference!"

Like other Sheptone nickel plated electric guitar strings, WARRANT "Cherry Pie" 30th-anniversary limited-edition strings are handcrafted one at a time for the best tone possible. The U.S. made strings are sourced from premium, nickel-plated steel that's carefully wrapped around a treated hex steel core. It's a meticulous process, but Sheptone wouldn't have it any other way, as the method helps to ensure tone, feel, and durability. For the members of Warrant, these strings are perfect right out of the package.

Robert Mason, WARRANT vocalist and guitarist, said that he looks for three things in a set of strings: tone, consistency, and an unmistakable "killer vibe." "Our Sheptones deliver all of that, from clean ballad tones to full on rock power," he said. "Thirty years of 'Cherry Pie' feels good at every show!"

The strings are available direct from the Sheptoneweb site or WARRANT performances and online store. Sets are $10.99 each.

Founded in 2007, Sheptone handcrafts electric guitar products without compromise, one at a time, with the materials, time, and intent, to achieve the ultimate tone. 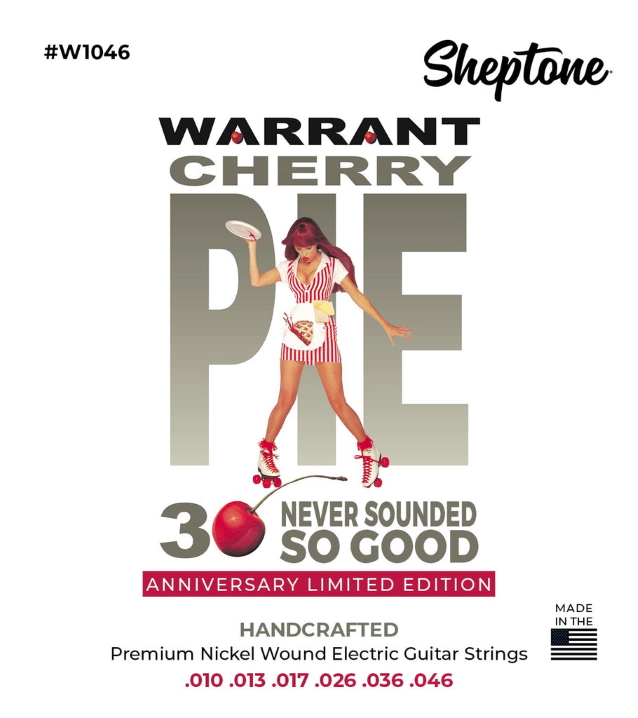