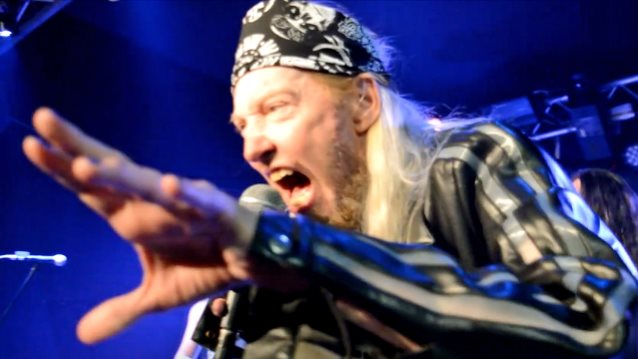 SANCTUARY and NEVERMORE singer Warrel Dane was recently interviewed by Metal Wani's Carla Morton. You can now listen to the chat below. A couple of excerpts follow (transcribed by BLABBERMOUTH.NET).

On his memories of recording NEVERMORE's 2000 album "Dead Heart In A Dead World":

Warrel: "That was the first record NEVERMORE did with Andy Sneap as producer. We were really scared to change producers because we had been working with Neil Kernon before, so 'Dead Heart' was the first one with Andy. We recorded it in Texas at the same studio [Village Productions] that we did 'In Memory', 'Politics Of Ecstasy' and 'Dreaming Neon Black', but with a different producer. It was completely different, but at the same time, I think since we were nervous about changing the producer, it made us feel more grounded because we knew the environment. We had so many crazy things happen during the recording, and some of it I should not even talk about because it was so crazy. [Laughs] We had a great time. We didn't realize that years later, people would say, 'This record is a groundbreaker.' It was the first time we used seven-string guitars, which was Jeff's [Loomis] idea. So things got a little heavier on the bottom end and it was our first experiment with using different tunings, and the seven-string guitars, and luckily, it worked! Now, at the time, I was like, 'Oh my God! Are we making a big mistake?' But now I know we did the right thing."

On the status of the next SANCTUARY album:

Warrel: "The next record is coming. It's called 'Dead Again'. It will come next year, but late next year. It's way faster and more like old-school thrash metal, but sounding a bit modern and it's fucking heavy."

On the plans for SANCTUARY to release an album full of old demos and songs:

Warrel: "It's coming in a few months. It's called 'Inception'. It's old demos for songs that nobody has heard before. A lot of the songs are from [1987's] 'Refuge Denied', but they're remixed from the demos by Zeuss [Chris Harris], the guy who produced [2014's] 'The Year the Sun Died'. The sound is fucking amazing. I'm interested to see the reaction from fans because some people will say, 'Oh my God! This sounds too modern.' Because they love the old sound of 'Refuge Denied', which, looking back now, that record does not sound that good. The original 'Refuge Denied' sounds like 1988, the new one sounds like 2017 on crack. It's fucking heavy and it sounds amazing. But the unreleased songs are crazy. I'm singing so high it's ridiculous, but I was in my 20s. I'm not going to be one of those singers who's going to lie and say, 'Nobody wants to hear those old songs.' I can't sing that high anymore. At least I admit it. I know some singers — we're not going to say names—that will say, 'Oh, nobody wants to hear those old songs.' But really, they can't sing them anymore. To play the song 'Battle Angels' live, some nights I can do it and it sounds good. Some nights, I'm like, 'Oh my God! Really? Do I have to? I don't know if I can do it!' When you get older, especially as a male vocalist, you learn how to sing on different nights, because sometimes you could do it like you were a kid, but the nights you can't, you know to stay away from it. You always want to give the best to the fans. Of course there are people who are going to be mad, 'Oh my God, you didn't play 'Battle Angels' tonight. What's wrong?' 'Uh, dude. My voice felt bad. I didn't want to do it half-assed.' I want it to be perfect, but it will never be perfect."

On his plans to release another solo album:

Warrel: "It's coming soon. Most of the songs are written. Next month, we start recording."

On the possibility of replacing Jeff Loomis in NEVERMORE:

Warrel: "I have mixed feelings about that. I don't think Jeff has the time to do another NEVERMORE record. I would do it. Replacing him… I'm not so sure you can do that. I could try and see what happens. There have been legendary guitar players that have been replaced. SAVATAGE is a good example, but Criss Oliva died and he was replaced and SAVATAGE went on to do brilliant records, even with a different singer. That's something that I would approach with a lot of trepidation. I don't know if it would work, but never say never. Maybe there will be another NEVERMORE record without Jeff, maybe there will be one with him. That's not my priority right now. My priority for the moment is my next solo record and then moving on to the next SANCTUARY record. I've got my time worked out for me."

On if one-time NEVERMORE touring guitarist Chris Broderick would be a viable replacement for Loomis in the band:

Warrel: "That's a nice idea. I didn't talk to him about it, but maybe I should. I think that would be kind of cool. He never wrote any music for NEVERMORE, so first and foremost, if I decide to use another guitar player besides Jeff and that's a big 'if,' it would have to be someone who could write in a similar style. A lot of people don't know this, but I had a lot of input in the NEVERMORE music. Jeff pretty much controlled all the guitar stuff, but I had my moments. Not many people know for the song 'Believe In Nothing', I wrote the chorus, and the guitar solo — Jeff will never admit that. He wrote the verses, the acoustic parts, so we worked closely on that one. That's one of my favorite NEVERMORE songs."