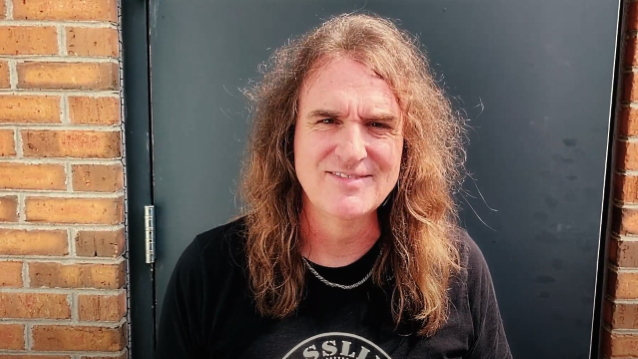 Was DAVID ELLEFSON's Family Supportive In Wake Of Sex Video Scandal? He Responds

During an appearance Tuesday (October 19) on SiriusXM's "Trunk Nation With Eddie Trunk", David Ellefson opened up about his dismissal from MEGADETH five months ago, just days after sexually tinged messages and explicit video footage involving the bassist and a woman that is not his wife were posted on Twitter. Asked if his family, including his wife of 27 years and their two children, both of whom are in their late 20s, were "supportive" and "understanding" throughout the ordeal, Ellefson responded (as transcribed by BLABBERMOUTH.NET): "Look, [they were] supportive, understanding… Not so supportive, not so understanding. I mean, dad's in a rock band, and not just any band — MEGADETH. Let's face it: we've been a band with a history. And this isn't to discolor or paint anything on the current MEGADETH at all, because, obviously, 2021 is not the way it was in 1986. But there's a reason we had a 'Behind The Music' [special from VH1].

"On the home life, again, look — I was in MEGADETH to start, and then the families come after. And again, I think there is a reconciling of the lifestyles, that it's, like, 'Okay, dad's off at the circus being the rock and roll guy and all that comes with that,' including a very comfortable life that affords you opportunities you would not get in any other life. At the same time, it certainly doesn't give license to go out and misbehave. So I think there is that. And again, that's probably you and me just talking as husbands and fathers and all that we are in a show biz lifestyle. And again, that's just the reality of that. And we've seen a lot of our friends be successful with it, struggle with it, et cetera, et cetera.

"I remember Ace Frehley years ago, and this isn't to discount it at all, but I remember there was a quote from Ace, he said, 'Drugs and girls are an occupational hazard.' And I remember reading that when I was a kid. And I didn't understand it at that time. And then later in life, I would understand, that's it's, like, hazard pay, if you will. And in every life, there is that, and that happens to be one in our way of life over here in the creative world, especially touring rock and rollers."

According to Ellefson, he has received a lot of support from fellow musicians in the months after the episode.

"I was flying pretty high pretty fast at a high altitude and hit some turbulence, no doubt," he said. "And people reminded me, [they said], 'Listen, we're all human. We all make mistakes, man.' And even more so in rock and roll.

"A lot of other musicians, industry people, rock stars — from the smallest to the absolute biggest — reached out to me," he continued. "Everybody was, like, 'Hey, brother, are you okay? Anything you need, let me know.' And it was very supportive from everybody. Which was great because everyone is on your side when you're picking up your Grammy and you're on the red carpet and everything is going great, but the greater judge of character is who are you, who am I when we're kind of at our bottom, when we've shown some real humanness. And this was a moment where, I'm happy to say, people really rallied around me.

"I've gone through a few dark seasons in my life over the years, as we all do — drugs and alcohol, in and out of MEGADETH 20 years ago. Things happen, things go down. This was a dark one, I'm not gonna lie."

Shortly after explicit video of him emerged online, Ellefson released a statement on Instagram denying all social media chatter that he "groomed" an underage fan. He also filed a report with the police department in Scottsdale, Arizona alleging unlawful distribution of sexually explicit images of him by unknown offenders. In the report, Ellefson admitted that he had been exchanging sexual text messages with a Dutch teenager, who captured a video of several of their virtual "masturbating encounters" without his consent and shared them with friends. (According to Ellefson, the woman was 19 at the time of their first virtual sexual encounter.) Ellefson, who lives in Scottsdale, first became aware of the video on May 9, when the claim "David Ellefson of MEGADETH is a pedophile" appeared on Instagram. Ellefson told police he was notified on May 14 by MEGADETH that the band would be parting ways with him. Three days later, he was fired.

Two days after MEGADETH leader Dave Mustaine announced Ellefson's latest departure from the band, the bassist released a follow-up statement in which he vowed to file a "defamation lawsuit" against the person who "illegally posted a very private video" of the bassist and made "false allegations" against him. He also said he was working with the police in Scottsdale "in their investigation into charges regarding revenge pornography to be filed against the person who posted the video. This person will be prosecuted to the fullest extent of the law," Ellefson wrote. He went on to say that he was "taking this time to be with my family" and wished his "bandmates" the best with their upcoming tour.