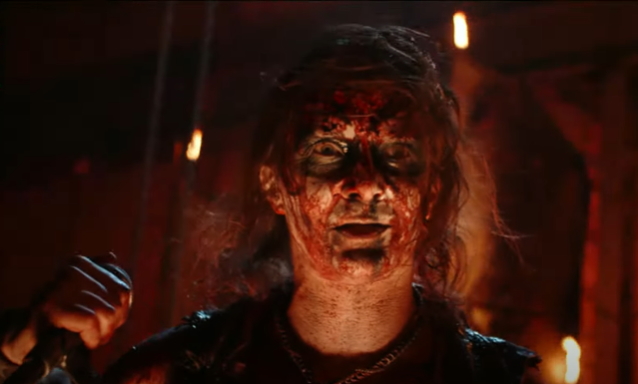 In a recent interview with Tinnitus Metal Radio, WATAIN frontman Erik Danielsson was asked to elaborate on his previous comment that "metal should be written by people who live metal lives." He said (as transcribed by BLABBERMOUTH.NET): "I think that, yeah, I don't see metal as a thing that can be performed by anyone else [but someone] who's, like, deeply affiliated with this form of, not only music but subculture and lifestyle in general. Of course you can — of course you can rip off a [IRON] MAIDEN riff even if you're a skater boy — but to me, the metal that always struck hardest, the metal that always kind of shook my soul has always been written by liberated spirits, by outlaw, free-thinking real rock and roll men and women. And that's just how it is; there's no way around that. I mean, if I would be a young guy wanting to write a love song, I would probably wait to write that love song until I have been in love. And if I would write a song about death, I would probably wait until I had some kind of actual experience of it. And the same thing goes, but in a larger context, with metal music. I think it kind of demands a personal affiliation, a kind of deep-rooted compatibility between the artist and the music. That's my profound belief."

Earlier this year, Erik told Sense Music Media that WATAIN has "always worked with extremes" in its expression. "We have always worked near the borders of sanity, and the limits of what's being allowed and so on," he said. "All these different interpretations of what we do, all these misconceptions and so on, I think they serve the purpose of maintaining a well-needed and quite flattering mystery around the band, you know? I don't mind that at all. I actually like that people don't really know how to approach us sometimes. Ultimately, I think 90% of everyone that listens to WATAIN does that because they find what we do relatable, maybe in a musical taste sense, or they like the way our things look and so on. Everything is pretty elaborate and meticulously done and so on … I don't think most people see it as such a radical thing, in their lives, to be a fan of WATAIN, but I think there is definitely a general conception among people who don't like WATAIN, or that are not that well acquainted with our sound or our records or our live concerts, I think maybe it's more around those people that there's this general confusion or misconception about what we stand for and so on. That's fine by me. [Laughs] That's not really the people that we are playing to anyway, you know? I'm fine with being an elusive anomaly when it comes to trying to pin us down or whatever, in a larger context."

WATAIN's latest studio album, "The Agony & Ecstasy Of Watain", was released in April via Nuclear Blast.