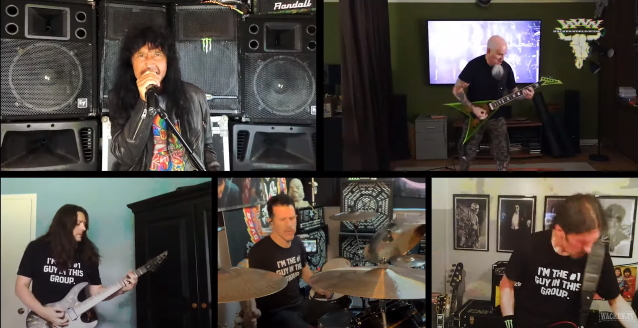 ANTHRAX played the song "Time" during the Wacken World Wide digital festival, which was held earlier in the month. Video of the performance, which was recorded while all five members of the band were in quarantine, can be seen below.

The 30th-anniversary Deluxe Edition of ANTHRAX's "Persistence Of Time" album is due on August 21 via Megaforce Records. Produced by ANTHRAX and Mark Dodson, it will be available exclusively on disc and vinyl. The CD package will include two CDs and one DVD, the vinyl edition offers four LPs, as well as revised cover art that reflects what had been the album's original visual concept.

Earlier this week, ANTHRAX guitarist Scott Ian said that the band has "a lot of material" written for its next studio album.

The follow-up to 2016's "For All Kings" will be ANTHRAX's third full-length release since the 2010 return of singer Joey Belladonna, who came back into the fold for the "Big Four" shows with METALLICA, SLAYER and MEGADETH, in the process helping inspire a new wave of creativity.

In an interview with Syfy Wire's "Metal Crush", Ian stated about the progress of the ANTHRAX songwriting sessions: "We had already started working on stuff with the intent of finishing it up in the springtime of this year, of '20, and then maybe getting in the studio and either having a record out later this year or early '21. But obviously all those plans have now changed [in the wake of the coronavirus pandemic]. We have still been working on stuff through the magic of the Internet. We can do a lot over Zoom and FaceTime, sending music back and forth through e-mail and all that. But we need to really get in the room and work on the arrangements and really play something, like, 30 times until you really understand it and feel like, 'Okay, this is what this arrangement needs to be.' But that's kind of the holdup at this point. But we certainly have a lot of material, which makes me very excited about when we can actually get in a room together and [work on stuff]."

At last year's Download festival in the United Kingdom, drummer Charlie Benante said fans can expect to hear some surprises on ANTHRAX's next disc. "There's some extreme stuff on this record that we touched on," he said. "There's different things that we're gonna try and do that's gonna make it next level."

Earlier last year, Benante told Australia's "Everblack" podcast that ANTHRAX's new music is shaping up to be "a little more in the aggressive style."