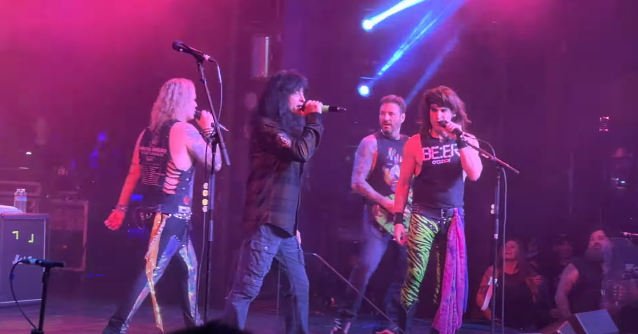 California glam metal jokesters STEEL PANTHER were joined onstage by Joey Belladonna (ANTHRAX) and Jason Hook (ex-FIVE FINGER DEATH PUNCH) to cover JUDAS PRIEST's "You've Got Another Thing Comin'" during their ShipRocked concert aboard the Carnival Breeze on January 25. You can now watch fan-filmed video of the performance below (courtesy of YouTube user PGMD).

Belladonna, whose most recent return to ANTHRAX was officially announced in May 2010, was originally the lead singer of ANTHRAX from 1985 to 1992, and was considered part of the band's classic lineup (alongside Dan Spitz, Scott Ian, Frank Bello and Charlie Benante),which reunited and toured during 2005 and 2006. His voice was featured on over 10 albums, which reportedly sold eight million copies worldwide.

Formed by guitarist Scott Ian and bassist Dan Lilker in Queens, New York on July 18, 1981, ANTHRAX was one of the first thrash metal bands to emerge from the East Coast and quickly became regarded as a leader in the genre alongside METALLICA, SLAYER and MEGADETH.

ANTHRAX's latest album, 2016's "For All Kings", followed a five-year period during which the group experienced a rebirth of sorts, beginning with ANTHRAX's inclusion on the "Big Four" tour, and continuing with the 2011 release of comeback LP "Worship Music".

Belladonna had been critical of ANTHRAX's decision to fire him at the height of the band's success, telling MikeJamesrRockShow.com: "Personally, it sucks just to think all those years went by that I didn't really have a chance to do anything. 'Cause I could have sang on any of those records [that were made during the John Bush era]. Not to say that what they did was… whatever reason and whatever style and all that stuff. I could have easily sang that regardless, no bones. It would have been easy to sing. It's just I think they were chasing some other idea. I always say that, whether they disagree. I don't think there was any reason to move. But you know what? We're here now."