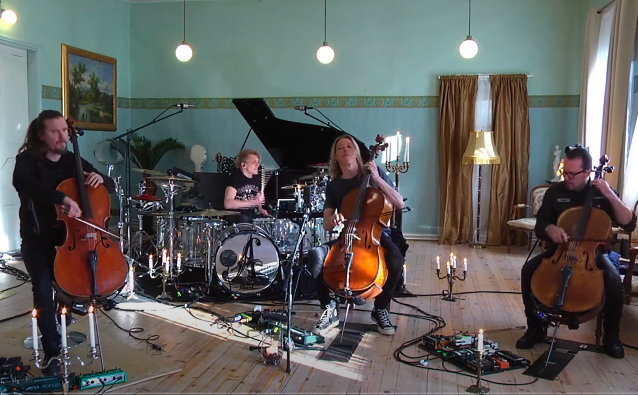 On Saturday, April 25, Finnish cello rockers APOCALYPTICA livestreamed a performance from their rehearsal room, featuring some of the material from their recently released studio album, "Cell-0". The entire hour-long session can now be seen below.

Addressing the online viewers, APOCALYPTICA's Eicca Toppinen said: "If there is somebody watching this and doesn't know that we released a new album in January called 'Cell-0'. Our ninth album, a fully instrumental piece of music — a big piece of music. And, of course, the tour we were supposed to start, and we will start the tour at some point when it's possible. But, of course, that was the 'Cell-0' tour and very much based on new music.'

He continued: "['Cell-0'] was a very interesting album for us to do. After the 'Plays Metallica [By Four Cellos]' thing, playing that anniversary tour, we really started to think that it would be most exciting for ourselves to try to find what is the most special thing about APOCALYPTICA and start to build the album based on that. And therefore we didn't have any producer for the album, because it was a very isolated process to make the record. And it's been amazing, actually.

"Thank you for all the feedback we have got from you people about the album and how you have found it and how you felt it," he added. "It's been very heartwarming for us to see that the majority of people have found the album how we felt when we did it and what we actually wished for, what it would do to people's feelings when listening to the music. So, thank you very much for the great words. And, actually, we need to thank you for all the support in general, what you have given for us. We are receiving a lot of love and support. You're encouraging us a lot to keep on going and have fun together with music."

Rather than put strategic attention on aspects like writing singles, the band approached "Cell-0" as a fully formed piece of art, connecting the right details and hues with the energy of being a real cello-metal band. By pushing themselves to find other places and levels in their music, APOCALYPTICA opened up to some seemingly unorthodox methods and emotions while traveling through that creative process.