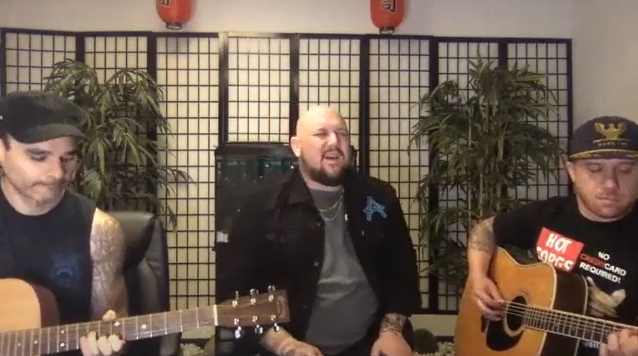 Earlier this week, ATREYU members Brandon Saller (vocals),Dan Jacobs (guitar) and Travis Miguel (guitar) performed an acoustic version of their song "Warrior" for the listeners of the Tucson rock radio station KFMA. You can now watch video of their performance below.

"Warrior" is taken from ATREYU's upcoming album, "Baptize", which is due on June 4 via Spinefarm Records. The album version of the track features a guest appearance by BLINK-182 drummer Travis Barker.

Regarding how the Barker collaboration came about, Brandon told Detroit's WRIF radio station: "That came really organically. John Feldmann, who produced the album — we've been making records with him for over a decade, and this is the third record we've done with him. He works really closely with Travis on a lot of [things] — he's done many of the BLINK records, and does a lot of projects with Travis. So [Travis] is kind of in and out of the house pretty often, like a couple of times a week. Just, like, 'What up, Trav?' He'll walk by and he's talking to John, and then he leaves.

"When 'Warrior' came up, I had the concept of wanting to do a really big bridge that I wanted to feel like you were mid-bleachers at a high school football game — that energy of the drums and that kind of power," Saller continued. "And I'm not a technically trained marching [band player]. I was never in a marching band; I never was a rudiment guy. I never did that. I just wanted to be like Animal from The Muppets and beat up drums. So I was, like, 'I don't wanna try and fake this, 'cause it's not gonna sound how it's supposed to. I wanna get someone that's real.' And, obviously, Travis is so good at that; he kills that whole realm. So he was stoked to do it. He came in and just laid down a bunch of layers on layers on layers, and it sounds like I wanted it to — like you're in the middle of a football game… A song like 'Warrior', with the subject matter too, sonically, it needed to match the power of the lyric."

"Baptize" marks ATREYU's first album since the departure of vocalist Alex Varkatzas last September. The LP showcases ATREYU's current lineup consisting of Saller focusing completely on singing after previously sharing lead vocals with Varkatzas for most of the band's two-decade-plus existence. Sitting behind the kit is Saller's HELL OR HIGHWATER bandmate Kyle Rosa, who had filled in for Saller on drums in 2019 after Varkatzas bowed out of the band's European tour while dealing with serious back and hernia issues.

ATREYU previously stated about "Warrior": "'Warrior' is song about persistence and never giving up. We hope this song can be the puzzle piece that helps people realize that we ALL have the capacity for greatness. Sometimes, greatness can exist in the shadows and lives buried under negativity, trauma, or anxiety. 'Warrior' is about searching through all of that endless darkness to finally find the sunrise."