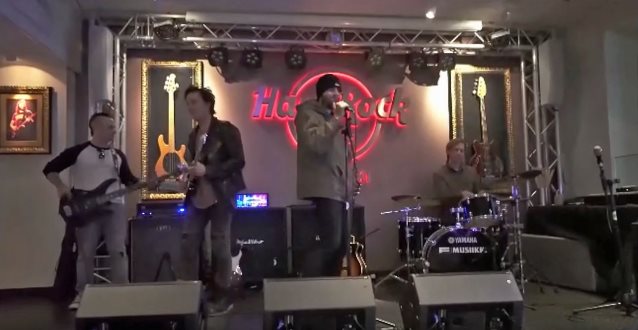 Several apparently inebriated members of AVENGED SEVENFOLD played a somewhat sloppy rendition of their song "Nightmare" during an unannounced appearance at a small restaurant and bar in Helsinki, Finland on March 5. Using equipment that was supplied by the Hard Rock Cafe, vocalist M. Shadows, guitarist Synyster Gates, bassist Johnny Christ and drummer Brooks Wackerman performed the track to what was apparently an almost-empty bar before calling it quits.

Said the band in a Facebook post: "After arriving in Helsinki [on March 5], we decided to head to the local Hard Rock Cafe Helsinki and grace the customers with some sweet tunes. Unfortunately, as the patrons fled for the exits, we were cut off after only half of 'Nightmare' was played. Maybe better luck tomorrow."

AVENGED SEVENFOLD played at Hartwall Areena in Helsinki on March 7 as part of its European headlining tour with support from DISTURBED and CHEVELLE.

The band filmed a music video last month in the Los Angeles area for the song "God Damn" from the new disc.

"The Stage" debuted at No. 4 on The Billboard 200 album chart back in November following its surprise release. Co-produced by the band and Joe Barresi, the disc features eleven panoramic tracks tied together by an Artificial Intelligence theme. Inspired by the writings of Carl Sagan and Elon Musk, the album is the band's first thematic release. While the term "AI" conjures up images of robots and fantasy films, the band steers clear of a science fiction storyline. Instead, the album sees them taking a futurist's look at the accelerated rate at which technology's intelligence is expanding and what that means — good and bad — for the future.