Los Angeles rockers BLACK VEIL BRIDES played an acoustic set for the Baltimore radio station WIYY (98 Rock) on Thursday, March 25. The performance was part of the band's first-ever virtual acoustic radio tour, which is being held in conjunction with eight local radios stations. The shows started on March 23 for WEBN in frontman Andy Biersack's former hometown of Cincinnati, Ohio and will wrap on April 2 for KCJK in Kansas City, Missouri. Other markets include Columbus, Ohio; Baltimore, Maryland; Detroit, Michigan; Monmouth Ocean, New Jersey; Phoenix, Arizona; and Madison, Wisconsin. Each performance will be unique and a different set for each station. All shows are streaming free.

In November, BLACK VEIL BRIDES released "Scarlet Cross", which will appear on the band's upcoming album, "The Phantom Tomorrow", tentatively due this summer. The track was produced by Erik Ron (GODSMACK, DANCE GAVIN DANCE, BUSH) and guitarist Jake Pitts and was accompanied by a music video directed by longtime collaborator Patrick Fogarty and based on a concept written by Biersack. 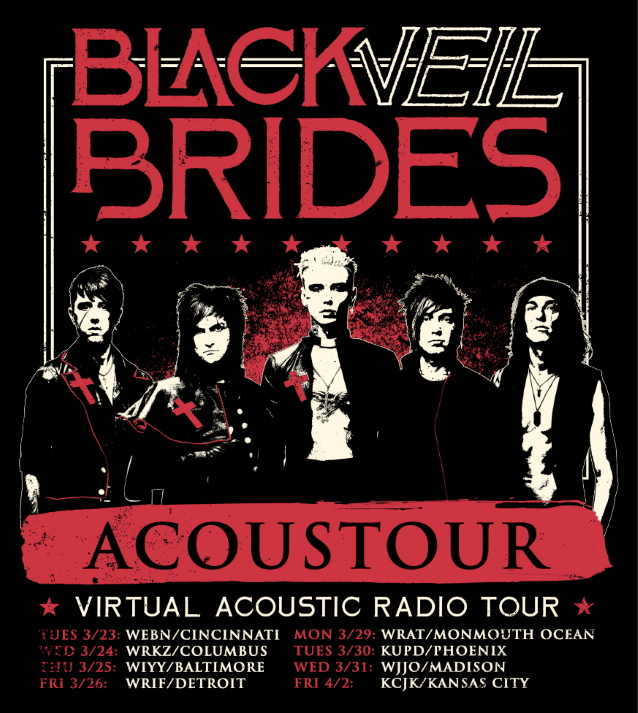