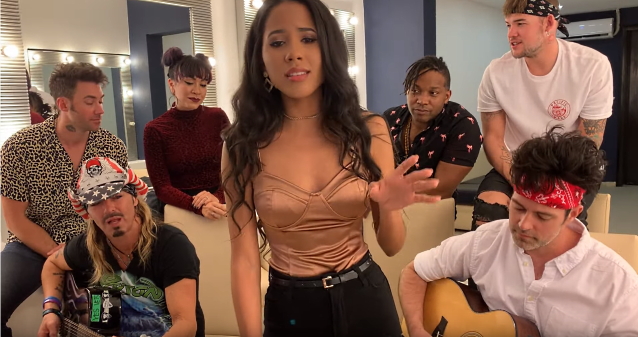 Bret Michaels has shared a video of a never-seen-before English and Spanish version of POISON's sole chart-topping single "Every Rose Has Its Thorn". Joining Bret for the performance, which was filmed at the Hard Rock Hotel & Casino in Punta Cana, Dominican Republic, were "American Idol" singers Ace Young, Jeremiah Richey, Diana DeGarmo, James Durbin, Brandon Rogers and Elena Lansen.

In the official video description, Michaels's team calls the rendition "an awesome example of music being the universal language, bringing all together and calming our souls."

"Every Rose Has Its Thorn" was originally released on May 3, 1988 on POISON's second album, "Open Up And Say... Ahh!", and was written by Michaels, C.C. DeVille, Bobby Dall and Rikki Rockett. The tune was issued on October 12, 1988 as the third single pulled off the album, following "Nothin' But A Good Time", which peaked at No. 6 and "Fallen Angel", which topped out at No. 12.

Michaels recalled that outside of the band, there was a somewhat cool and mixed reaction to "Every Rose Has Its Thorn", telling Billboard: "There was not a lot of love for the song, because it was very different sounding from what was happening at that moment. We had hits with 'Talk Dirty To Me', 'I Want Action', and although 'I Won't Forget You' from '(Look What The) Cat Dragged In' did good, that wasn't. if the label had its... When I say label, Capitol/EMI pushed ['Every Rose Has Its Thorn'] back till the third single on 'Open Up And Say... Ahh!' and I'm not even sure they were gonna do that, because the first two exploded the record to over, like, three million, and then in their eyes, they're like, 'That's a success.' And I'm like, 'No, this song means the world to me.'"

Michaels admitted that it's the ballads that really force him to dig deep and reveal what he's made of as a songwriter. "The toughest songs to write are good-time party songs," he said. "And let me explain that. People are always like, 'Oh man, 'Nothin' But A Good Time', that must have been an easy song to write.' It's not an easy song, because when you're partying and having a good time, there's no emotion in you that says, 'Let's sit down right now and write a song.' But you have something break your heart, you have a best friend like 'Something To Believe In', one of your best friends that you saw their face every day for years and years and years, die instantly over Christmas... What I'm saying to you is those moments are the toughest moments in your life, but oddly enough, the most defined songs and easier songs to write because you have an exact emotion... I've probably got 10 pages of lyrics, but I tried to then go back and capture the story so that it didn't become a 28-minute song."

After playing "Every Rose…" onstage every night for three decades, Michaels was asked how he feels about his only No. 1 hit to date, and said: "I honestly love playing it live. It's still, to me, it's not just good for me, but it's — the fans love singing it. If you go back and look even now, you go back to the arenas or amphitheaters and listen, everyone's singing the song. And for each person, it's probably meant something different. But for me, to be able to go out there and sing it and still do it this many years later is an amazing feeling. I still get chill-bumps on my arms doing that and knowing it's withstood the test of time."

POISON's upcoming "The Stadium Tour" with MÖTLEY CRÜE, DEF LEPPARD and JOAN JETT & THE BLACKHEARTS will kick off on June 21 in San Antonio, Texas and will include newly announced gigs in Kansas City, St. Louis, Minneapolis, Nashville, Cincinnati and Cleveland. The trek marks CRÜE's first live dates since wrapping its 2014/2015 farewell tour. The band toured with POISON back in 2011 and DEF LEPPARD teamed up with POISON for a string of road dates in 2017 — but the upcoming jaunt marks the first time all four acts have hit the road together for an extended tour.