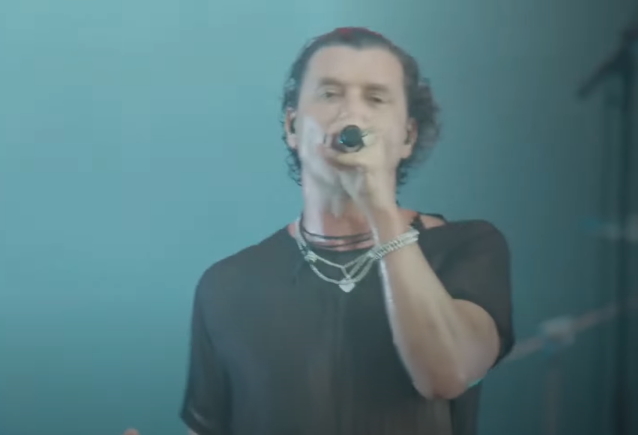 BUSH performed a new song called "More Than Machines" live this past Saturday (July 23) at the Atlantis Concert For Earth. A studio version of the track, which will appear on the band's next album, will be released tomorrow (Wednesday, July 27). A preview of the single, as well as professionally filmed video of the Atlantis Concert For Earth performance, is available below.

BUSH frontman Gavin Rossdale told Germany's Radio Bob! about the musical direction of the band's upcoming follow-up to 2020's "The Kingdom" album: "I think I had so much fun to make it heavy that I just stayed heavy and stayed with heavy tuning and strong riffs — stuff [that will go over well at] festivals. I just like it to be exciting and really driving. So it's similar to the last one. If you liked the last one, that level of heavy, then it's like that."

In November 2020, BUSH played two drive-in shows across Southern California to celebrate the release of "The Kingdom Deluxe Edition". The record featured six bonus songs, including "Heroes", a special tribute to David Bowie, as well as live performances of the title track "The Kingdom" and hard-charging single "Flowers On A Grave", which went Top 10 on Active Rock Radio.

The first single from "The Kingdom", "Flowers On A Grave", was unveiled in March 2020. The track, co-produced by Erik Ron and Rossdale, was the follow-up to "Bullet Holes", heard atop the end credits to "John Wick: Chapter 3 – Parabellum".

Rossdale has already started filming the show, with Roundtable Entertainment producing the series.

"More Than Machines" arrives tonight at midnight around the world. Make sure you've pre-saved it to be the first to hear it! https://t.co/QaYpp0R05ghttps://t.co/RZwD75IxB2