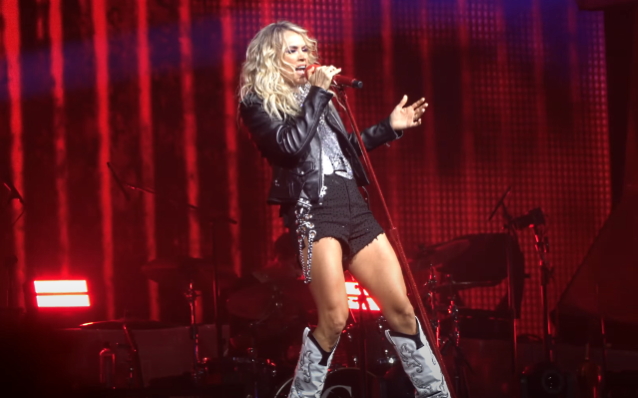 Country-pop superstar Carrie Underwood performed a cover version of GUNS N' ROSES' "Welcome To The Jungle" at the kick-off show of her "Denim & Rhinestones" tour on Saturday night (October 15) in Greenville, South Carolina. Fan-filmed video of the performance can be seen below.

A little over three months ago, Underwood joined GUNS N' ROSES on stage during the band's concert at London, England's Tottenham Hotspur Stadium. Underwood made a surprise appearance toward the end of GUNS N' ROSES' main set, performing "Sweet Child O' Mine" with Axl Rose and his bandmates. She later returned to the stage during the encore to sing "Paradise City".

This past April, Rose joined Underwood on stage at the Stagecoach country music festival in Indio, California to perform the same two songs. At the time, Carrie called the collaboration "the greatest night of my life."