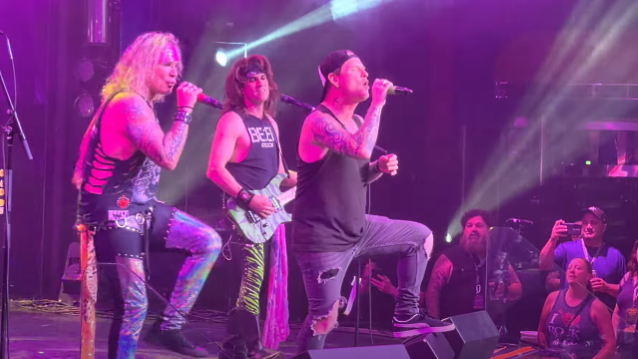 California glam metal jokesters STEEL PANTHER were joined onstage by Corey Taylor (SLIPKNOT, STONE SOUR) and Christian Martucci (STONE SOUR, COREY TAYLOR) to cover DIO's "Rainbow In The Dark" during their ShipRocked concert aboard the Carnival Breeze on January 25. You can now watch fan-filmed video of the performance below (courtesy of YouTube user PGMD).

Taylor has collaborated with STEEL PANTHER several times before, both in the studio and in a live setting. Notably, he was featured on STEEL PANTHER's 2009 album "Feel The Steel", singing "Death To All But Metal" and contributing backup vocals on "Asian Hooker" and "Eyes Of A Panther". STEEL PANTHER drummer Stix Zadinia told Juice magazine that Taylor attended some of the band's shows in Hollywood, eventually getting up on stage with them. Stix described STEEL PANTHER as being "bros" with Taylor since then. The drummer added: "Plus, he looks great naked. You can print that."

In a 2014 interview with Revolver magazine, Taylor stated about STEEL PANTHER's "All You Can Eat" album: "It's top to bottom so damn good. I would listen to it on the way to the studio to make the SLIPKNOT album [2014's '5: The Gray Chapter'] every day. There's nothing like driving through Hollywood listening to STEEL PANTHER. It's so fulfilling in so many different, weird ways. They write amazing songs and that's one of the reasons why they have the kind of legs that it takes for what they do keep going. They're great musicians and they're funnier than shit. They're some of the smartest, funniest dudes I've ever met."

In December 2020, Zadinia revealed the existence of a previously unreleased STEEL PANTHER collaboration with Taylor. The track, "Steel Panther Fucked My Girlfriend", was originally written by STEEL PANTHER guitarist Satchel and was recorded with guest vocals by the SLIPKNOT frontman before being shelved for reasons that are not clear. A few years ago, the song ended up being covered by Wheeler Walker Jr., the alter ego of comedian Ben Hoffman, who made his version available on YouTube.

Stix discussed the track in an interview with "The Crash Report" podcast, saying that STEEL PANTHER "never played it. Somehow [Wheeler Walker Jr.] got a copy of it. We never released it. And there's a version out in one of our hard drives with Corey Taylor singing it."

When the interviewer told Stix that STEEL PANTHER should release its version of "Steel Panther Fucked My Girlfriend", Stix agreed. "We should," he said. "We fucking should. You know what? I need to talk to Satchel about that. Corey Taylor sings 'Steel Panther Fucked My Girlfriend'. It's amazing. It sounds like the fucking EAGLES — the original version."

He continued: "Wheeler Walker did a version of it. The end product, the end result of it, I heard and I was, like, it's cool and it was nice of him to wanna do, but when you hear our version of it, especially with Corey on it, you'll be, like, 'This sounds like the fucking EAGLES.'"

When legendary heavy metal singer Ronnie James Dio (DIO, HEAVEN & HELL, BLACK SABBATH, RAINBOW) died in May 2010, Taylor released a statement to Billboard in which he called Dio "one of the strongest, purist and consistent singers of all time. Ronnie sang like he lived — all out, from the heart, with so much honesty and joy. He was a great man with a smile and a handshake for fans and peers alike. He spoke his mind and stood his ground for decades. I will miss him dearly."

In a separate interview with The Pulse Of Radio, Corey said, "When I got that news that [Ronnie] had passed away, man, it seriously — it broke my heart. It broke it in two. Because honestly, I just feel like there will never be another Ronnie James Dio. He had such a pure voice — and still singing his ass off. I just know he'll be missed, and I will miss him as well."