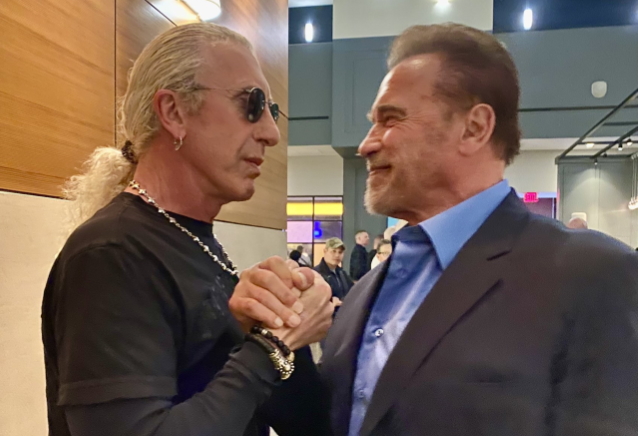 Dee Snider performed at this year's edition of the Arnold Sports Festival in Columbus, Ohio.

The TWISTED SISTER singer and his solo band appeared last night (Saturday, March 5). Video of their performance can be seen below.

The Arnold Sports Festival is being held March 3-6 at the Greater Columbus Convention Center and other venues, including the Ohio Expo Center.

Arnold Schwarzenegger's event, which draws more than 20,000 athletes and 200,000 fans to Columbus, was canceled in 2020 and 2021 because of the coronavirus pandemic.

More than 20,000 athletes from more than 80 nations are expected to appear at the festival, participating in about 60 sports.

Early Saturday morning, Snider took to his Twitter to share a new photo of him with Schwarzenegger, and he included the following caption: Pretty incredible night last night. Had dinner with a personal hero and inspiration @Schwarzenegger ! When the cameras came out he said, 'Let's do The Predator pose!' #lifegoals".

DEE SNIDER of “Twisted Sister” opens up the 2022 ARNOLD CLASSIC in Columbus, Ohio this Saturday evening!! I suppose he can now call himself the “Twisted Lifter”…💪🎸🎤👍

Pretty incredible night last night. Had dinner with a personal hero and inspiration @Schwarzenegger! When the cameras came out he said, “Let’s do The Predator pose!” #lifegoalspic.twitter.com/lA5UyKDlif

Amazing moment last night at The Arnold Fitness Fest when I got to present ⁦@Schwarzenegger⁩, the man who inspired ⁦⁦@TwistedSisterNY⁩ biggest album, a plaque for more than 8 million albums sold worldwide! #myheropic.twitter.com/soII96btFh

Thank you so much, @deesnider! I will treasure this and keep it on the wall in the gym to inspire me! https://t.co/xITxFQJeZs

COLUMBUS ARE YOU READY TO ROCK!?!