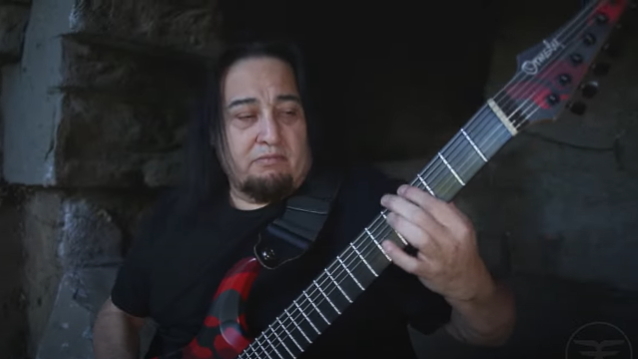 Video of FEAR FACTORY guitarist Dino Cazares playing the band's first new song in over five years, "Disruptor", can be seen below. The track will appear on the band's upcoming album, "Aggression Continuum", due on June 18 via Nuclear Blast Records.

The "Disruptor" video — created by Finland's Riivata Visuals — is also available, along with the "Aggression Continuum" cover art, designed by LIGHT THE TORCH guitarist Francesco Artusato.

Cazares previously commented: "This record is one of my proudest achievements and I'm really excited for it to finally be released. There were a lot of personal struggles, sacrifices, and legal issues involved with this record which almost didn't see the light of day, but through passion, determination, lots of hard work and not giving up the fight, it’s finally ready for the world to hear. I felt that I needed to prove myself once again as I always try and make each record better than the last. Listen, and understand! This album is pissed! It can't be bargained with. It can't be reasoned with. It doesn't feel pity, or remorse, or fear and it absolutely will not stop, ever, until you are hooked. You must fight to survive in the 'Aggression Continuum'."

Bell's exit from FEAR FACTORY came more than two weeks after Cazares launched a GoFundMe campaign to assist him with the production costs associated with the release of FEAR FACTORY's long-awaited new LP.

In explaining his reasons for starting a fundraising campaign, Cazares said that all donations would go toward covering newly incurred production costs involved with the making of the new FEAR FACTORY LP, including re-recording the drums, guitars, bass and keyboards, as well as production by Damien Rainaud and Cazares, and mixing and mastering by Andy Sneap. Burton's original lead vocals, which were recorded in full in 2017, remain on the new version of the album.