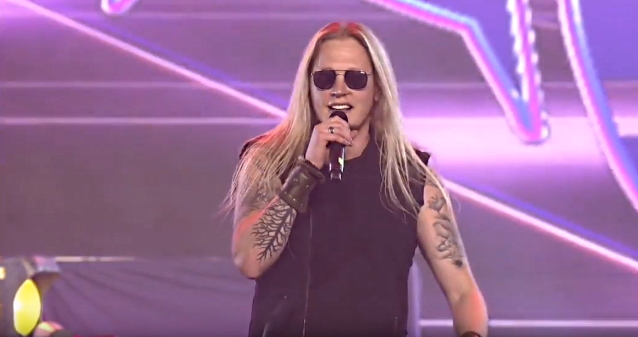 On September 27, power metal legends DRAGONFORCE performed at TwitchCon 2019 in San Diego, California during the opening ceremony at the Glitch Theatre, to celebrate the launch of their eighth full-length, "Extreme Power Metal". In addition to the live audience of thousands, this performance was streamed live on Twitch. Video footage of the concert can now be seen below.

Twitch is a one-of-a-kind collision of subcultures, games, communities, and streamers co-creating content around everything they're into, with over 1.3 million people participating at any moment.

Guitarist Herman Li is a Twitch partner and has livestreamed DRAGONFORCE rehearsals, album recording sessions, and live shows. DRAGONFORCE plans to stream daily from its upcoming U.S. tour, and Li will give away a guitar live on stream.

Leclercq, who became an official member of DRAGONFORCE in 2006, played his last show with the band last month in Hamburg, Germany.

Regarding "Extreme Power Metal", Li said: "This album again combines the best of DRAGONFORCE in an even bigger, more epic way than we have ever done before. We are so excited for fans to hear it." Following the departure of Vadim Pruzhanov from the band last year, the keyboards of this new album were performed by Coen Janssen of symphonic metal titan EPICA, bringing a new dimension into a DRAGONFORCE album. Guitarist Sam Totman said: "We worked really closely with Coen on this new album. We are so happy with what he has brought into this new album. Every fan will be so happy to hear his majestic playing."