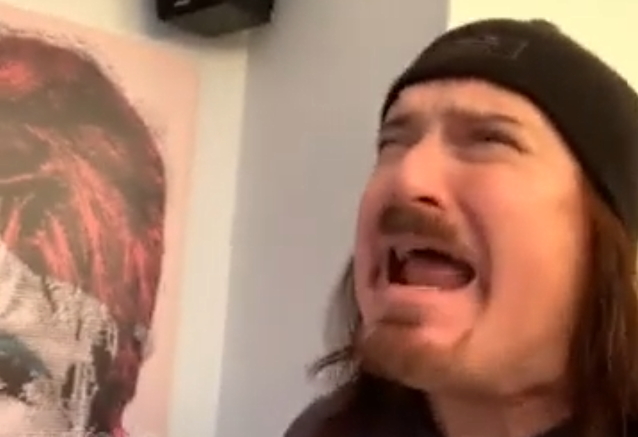 Video of DREAM THEATER singer James LaBrie belting out an a cappella version of "Pull Me Under", the first single from the band's breakthrough album "Images And Words", can be seen below.

LaBriecharges $55 for each of his Cameo videos.

Upon its release in 1992, "Pull Me Under" and its accompanying video received airtime on radio and MTV and expanded DREAM THEATER's audience.

"'Pull Me Under' was a surprise to everyone, 'cause 'Pull Me Under' is… it's over eight minutes long, never meant to be a single," DREAM THEATER guitarist John Petrucci told Gitarre & Bass in 2017. "The songs being played on the radio were nothing like DREAM THEATER, but, for some reason, it must have stuck out to where people were calling the radio stations: 'What is that band? Oh my God! I wanna hear that song again.' And that kind of snowballed and grew, and 'Pull Me Under' became a rock radio hit. And I remember at the time I was living in New Jersey, on the East Coast of the U.S., and I'd turn on the radio and I'd hear it all the time. It was a cool feeling."

Asked if "Pull Me Under" is the most important song of DREAM THEATER's career, John said: "Yeah. Probably. Yeah. If you think about what it did for us as far as the future is concerned, it really put up on the map. It enabled us to go from local guys driving around in a van, playing to a few people in clubs to an international touring band with this whole long and very busy and productive career. And who knows? Without that kind of initial spark, we may never have been able to be as successful as we have. I mean, who knows? Maybe we would have. I don't know. But it certainly, certainly helped. Big time."

Earlier this month, Petrucci confirmed that DREAM THEATER is using the coronavirus downtime to commence the songwriting sessions for the follow-up to last year's "Distance Over Time" album.

DREAM THEATER has just released its ninth career live album, "Distant Memories - Live In London". Recorded at DREAM THEATER's sold-out show at the Apollo Theatre in London, the live release documents the band's popular world tour in support of "Distance Over Time" and the 20th anniversary of their seminal concept album "Metropolis Part 2 - Scenes From A Memory".