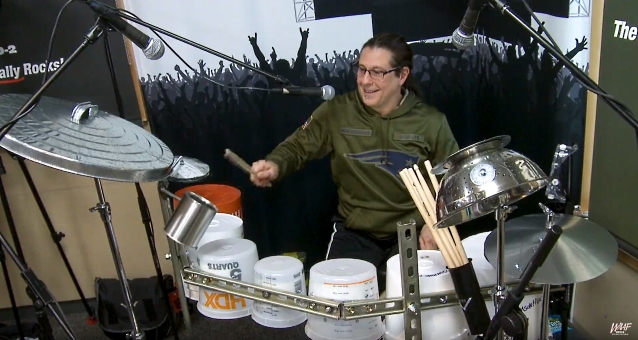 DREAM THEATER's Mike Mangini is arguably one of the greatest drummers in the world. So when the band came through Boston on April 8 to perform at the the Orpheum Theater, local radio station WAAF decided to put his skills to the test using a drum kit made out of buckets, pasta collanders, a trash lid, and anything else they had lying around. Check out the results below.

Mangini joined DREAM THEATER in late 2010 through a widely publicized audition following the departure of Mike Portnoy, who co-founded DREAM THEATER more than 30 years ago.

DREAM THEATER guitarist John Petrucci recently dismissed suggestions that Mangini has a more "robotic" drumming style than that of Portnoy, saying that Mangini is "one of the most talented" musicians he has ever had the opportunity to play with.

"I understand being a fan of a band and having a member change disrupt your whole world," Petrucci told Mike The Music Snob. "I get it. I'm a fan of bands [where] that happens. So that side I understand. But the concept or the thought that Mike Mangini, as a drummer, is lacking feel — that blows my mind, because the guy is just unbelievable. He is one of the, if not the most talented drummer I've ever, ever had the opportunity to play with. We can call out styles of music, and he has authentic feel to play anything from metal to rock to Latin to jazz to swing to shuffle. He's just a monster, monster musician."

Petrucci previously told "The Classic Metal Show" that he "wouldn't have done anything differently" in the way DREAM THEATER went about finding a replacement for Portnoy.

DREAM THEATER's 14th studio album, "Distance Over Time", was released on February 22. The disc, which marks the first for the band's new label InsideOut Music, was produced by Petrucci, mixed by Ben Grosse and mastered by Tom Baker.