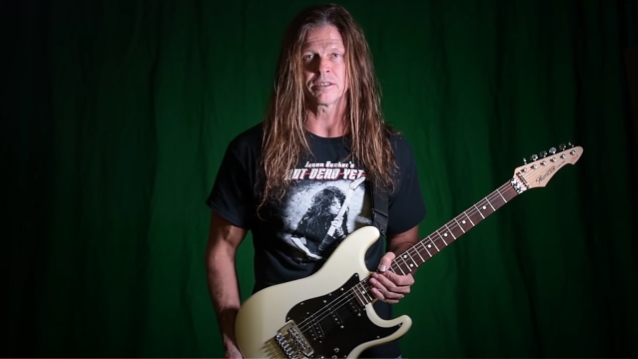 A video of former MEGADETH guitarist Chris Broderick playing the Jason Becker song "Perpetual Burn" on Jason's white, 22-fret Hurricane guitar can be seen below. The instrument, pictured on the cover of CACOPHONY's genre-defining "Speed Metal Symphony" and used to record Becker's groundbreaking solo album "Perpetual Burn", is one of three rare guitars being offered through Guernsey's Auctions, the prestigious New York auction house renowned for offering unique memorabilia and artifacts. These guitars are being sold as part of a fundraiser, co-organized by DRAGONFORCE guitarist Herman Li, to provide funds for Jason's ongoing battle with ALS.

Guernsey's Auctions will also offer the following in its "A Century Of Music" auction:

* Jason's blue, 24-fret Hurricane guitar, pictured on the cover of "Perpetual Burn" and used in the recording of "Boy Meets Guitar". This guitar has been thumb-printed by Jason and showing wear and tear from hours of playing, in studio and live.

* Jason's one-of-a-kind Peavy "Numbers" prototype guitar, pictured on the cover of Guitar For The Practicing Musician. A similar model was later put into production, but this was the first "numbers" model ever made. During a visit with Jason, Eddie Van Halen played this guitar, and during the months-long virtual fundraiser for Jason, this guitar has been played by Steve Vai, Tosin Abasi (ANIMALS AS LEADERS),Herman Li (DRAGONFORCE),Chris Broderick (ex-MEGADETH),Tim Henson (POLYPHIA),and Jason Richardson (ALL THAT REMAINS). This guitar has been thumb-printed by Jason.

* Jason's red leather jacket, worn on the "Perpetual Burn" album cover, along with the proof of the original album art. The album art is signed by Jason, one of his last autographs while he could still write.

The fundraiser for Jason Becker, which has taken place virtually on Twitch and Reverb, has raised over $200,000 so far for Jason's ongoing care.

Fundraiser co-organizer Herman Li says: "In America, having a chronic condition such as ALS can be unbelievably expensive. Our goal from the beginning has been to make sure Jason never has to worry about money again, so he can put his energy toward music and his health.

"It has been great to see the guitar community rally around Jason. He has given us so much inspiration, I'm glad we have the opportunity to give back."

About Guernsey's Action, Li says: "Working with Guernsey's Auctions has been wonderful. They understand how unique these guitars are and how inspirational and important Jason is. Jason played so few guitars in his life, so these instruments are incredibly special. Whoever buys these guitars will not only own a piece of history, they will be directly helping Jason battle ALS."

Becker says: "I am so grateful for all the love and support everyone has given to me and my family. As far as selling my guitars being sad, and that I shouldn't have to do it, I just want you to know that isn't how I feel. It makes me happy to see others playing my music. I feel good about passing on my guitars, thinking they mean something to others. I can't play them now, but other folks can. That's a good thing. And, I want myself and my family not to have to worry about money, if possible. Thank you for all the love, I send it right back to you."

To bid through Guernsey's Auctions, go to this location.

Thank you so much, Chris Broderick, for this awesome video! Man, you nailed it, just like you did on "Magic Woman," and...