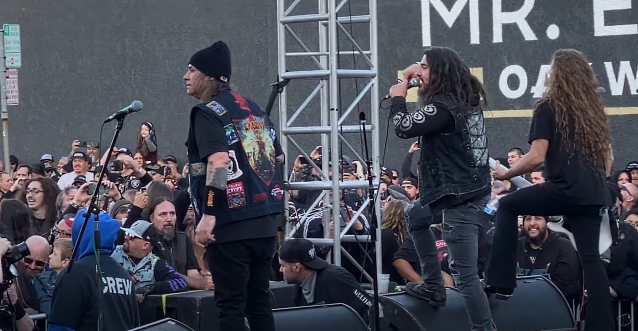 San Francisco Bay Area thrashers EXODUS were joined by Robb Flynn (MACHINE HEAD) and their former guitarist Rick Hunolt on stage during their March 6 concert at 3rd And Castro in West Oakland, California. Fan-filmed video of the performance can be seen below.

Flynn commented: "What a night.

"Seeing Tom Hunting alive, cancer free, and kicking ass is one of the greatest things on earth. Watching original H-Team guitarist Rick Hunolt slay up there right alongside the mighty Lee Altus, paying tribute to Paul Baloff was amazing. Long-time scene-veteran Brian Lew has produced some Paul Baloff action figures which frankly, are simply awesome, Zetro up onstage hoisting it in the air for all to see was a fantastic sight.

"This was some dream come true shit for me. EXODUS was and always will be a more-than-words-can-express inspiration to the music I write. It was a leave-it-all-on-the-stage moment for sure

"So many friends to hang out and sing-a-long with including Sean from VIO-LENCE, Sven ex-MERCENARY, Lars from RANCID, ALL of DEATH ANGEL, Wayne from HATEBREED, Chris Kontos (sick stage dive!),and so many other friends, plus took [my son] Wyatt to his first EXODUS show to see the thrash carnage firsthand.

EXODUS's setlist was as follows, according to Setlist.fm:

Back in 2009, Flynn discussed his love for early EXODUS in an interview with Rock Hard magazine. He said: "I lived and died by [EXODUS's debut album, 'Bonded By Blood']. Those songs and the fact that [late EXODUS singer Paul] Baloff was a freakin' madman. I mean, we'd go see them and it was so insane; those shows were so violent. We were still kind of like gangly kids going to Ruthie's and there's all these big dudes there just beating the shit out of each other, running or climbing across people's heads. I remember one of the first times I went to Ruthie's, there was a dude running around in the pit and he had a cow's leg bone and he was just bashing people with it in the pit and I was, like, 'What the fuck?!' [Laughs] There were guys setting up chairs about fifteen feet away from the stage, then running from the rear of the club and using the chairs to launch themselves on stage, taking out the guitar player... and that was them showing affection. [Laughs]"

Rick discussed his exit from EXODUS during a November 2021 appearance on "Put Up Your Dukes", the new podcast hosted by ex-EXODUS singer Rob Dukes. He said: "During the recording of 'Tempo', Gary [Holt, EXODUS guitarist] had just gotten clean a little while prior to that, and I was still using. But I've gotta say, Gary Holt — my hat's off to the man for… He never sweated me. Not once did Gary say, 'Dude, you're a piece of shit. I'm gonna fire you from the band if you don't get your shit together.' He never said nothing. He let it take its course, you know what I mean?

The San Francisco Bay Area thrashers' latest disc is the follow-up to 2014's "Blood In Blood Out", which was their first release since the departure of Dukes, the group's lead singer of nine years, and the return of Steve "Zetro" Souza, who previously fronted EXODUS from 1986 to 1993 and from 2002 to 2004.

The original lineup of EXODUS consisted of guitarists Kirk Hammett (now in METALLICA) and Tim Agnello, Hunting and vocalist Keith Stewart. Holt joined the band in 1981, while Kirk left two years before EXODUS's debut album, "Bonded By Blood", saw the light of day.

Rick E Hunolt sure was one sharp dressed man on stage with Exodus this evening!

I gotta say I don’t know Rick E Hunolt for very long but I can say he is genuinely a sweetheart of a human being. Very… 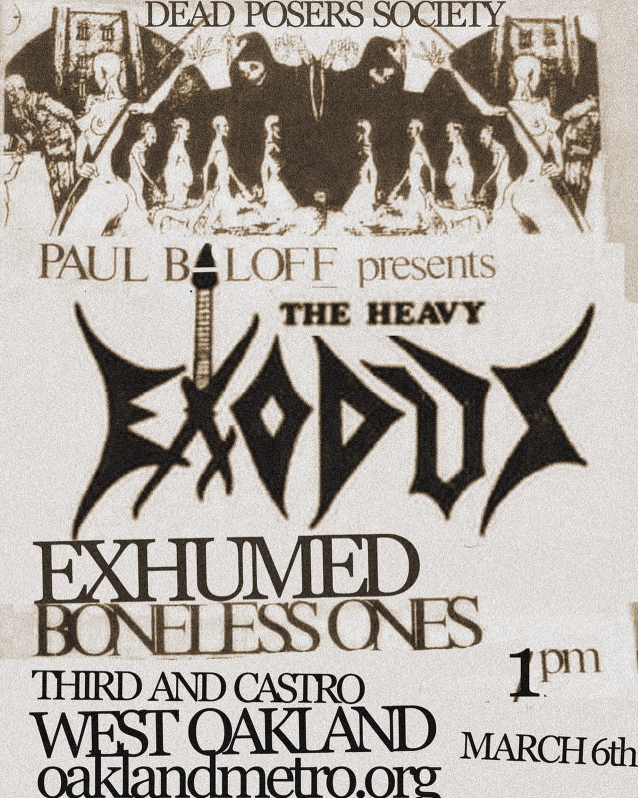