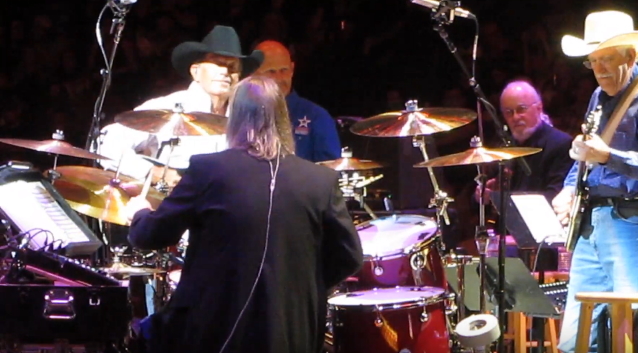 FATES WARNING and Sebastian Bach drummer Bobby Jarzombek performed with George Strait during the legendary country music artist's two-night stand at T-Mobile Arena in Las Vegas, Nevada over the weekend. Fan-filmed video footage of the concerts can be seen below.

Jarzombek joined Strait's nine-member ACE IN THE HOLE band earlier this year. The group includes Mike Daily on steel guitar and Terry Hale on bass, two musicians who have been with Strait his entire career.

In addition to songs from Strait's own catalog, the 69-year-old singer-songwriter also performed cover versions of Waylon Jennings's "Waymore's Blues", Townes Van Zandt's "Lefty And Pancho" and Tom Petty's "You Wreck Me".

Strait has sold over 68.5 million records and earned 33 platinum or multi-platinum albums, the most in all of country music, and 60 No. 1 singles — the most of any artist of any music genre in history. He is a member of the Country Music Hall Of Fame, holds a Grammy for "Best Country Album" with "Troubadour" and more than 60 music and entertainment industry awards.

San Antonio, Texas native Jarzombek has long been one of the Lone Star state's most respected and admired drummers. Since first making his mark with local metal outfit JUGGERNAUT in the mid-1980s, Bobby's surgical percussive assault has powered legends RIOT, JUDAS PRIEST vocalist Rob Halford's solo outfit and prog wackos SPASTIC INK, among others. A touring pro for over 30 years, Bobby has played on five continents and performed in front of some of the largest crowds in the world, including Rock In Rio and the Wacken Open Air estival. For the past 15 years, he has divided his time between prog metal stalwarts FATES WARNING and former SKID ROW vocalist Sebastian Bach's band. Bobby also continues to do live and studio work with a variety of country music acts.

Bobby issued his "Performance & Technique" instructional drum DVD in 2005 and then teamed up with Platinum Samples for the release of 2011's "Bobby Jarzombek Metal MIDI Groove Library".

Ok, this is my last clip from this past weekend.
George introducing the ‘Ace In The Hole’ bandmembers.
Coolest thing ever!