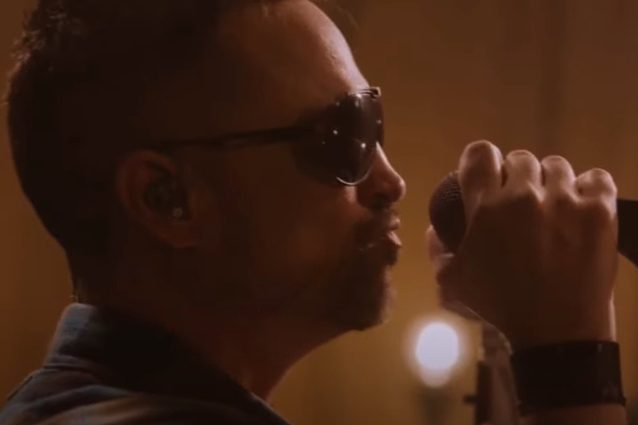 STONE TEMPLE PILOTS performed their iconic album, "Core", in its entirety for a livestream event on Friday, July 31 on Nugs.tv.

Video footage of the first song of the set, "Dead & Bloated", can be seen below.

A short time after the perormance, STP posted on social media: "Thanks to everyone who tuned into our Core PPV event tonight! ICYMI you can still buy a pass and watch the show on nugs.net through the end of the weekend."

STONE TEMPLE PILOTS guitarist Dean DeLeo told The Pulse Of Radio that the idea for the event came from his brother and bandmate, bassist Robert DeLeo. "I think it was just a matter of sheer boredom and thinking of what to do," Dean said. "[Robert] said, 'Hey, man, maybe we should get in a small room and play this first record and if all goes well we should just do each record,' and we all loved the idea.

"Look, we're all itchin' to just get out and play," Dean continued. "You know we had over a hundred shows pulled out from under us this year. Everything. Not rescheduled — canceled — and there's nothing on the books for 2021, so it's just, like, 'Let's do something! Let's play!'"

Dean went on to say a couple of the "Core" songs hadn't been performed live in a very long time. "There's two songs that haven't been played in forever," he said. "One of them is 'Naked Sunday'. I think the last time we played that was on 'Saturday Night Live', maybe 1993? So that one is one that's been locked away, and also 'Where The River Goes'. We haven't played that in many, many, many years — a couple decades."

Let us know in the comments if you watched our live Core PPV event yesterday! If you missed it, don’t worry, you can...

Thanks to everyone who tuned into our Core PPV event tonight!
ICYMI you can still buy a pass and watch the show on nugs.net through the end of the weekend. Purchase here: www.nugs.net/live-stp/