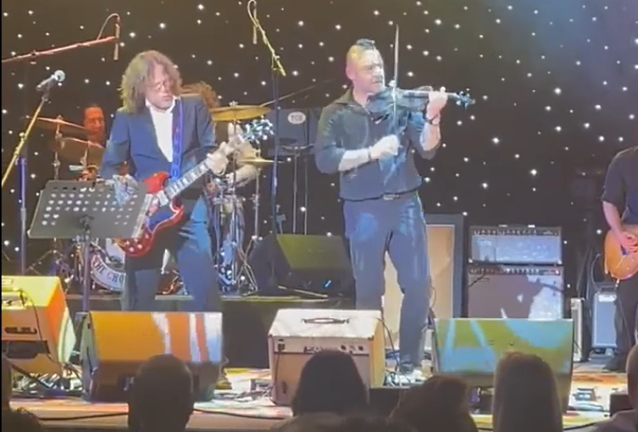 THE CHOPHOUSE BAND, the band led by former METALLICA bassist Jason Newsted, performed last night (Saturday, April 23) at the Maltz Jupiter Theatre in Jupiter, Florida. It was a benefit event for the Goldner Conservatory, a professional conservatory that offers the highest caliber of artistic education to students of all ages.

Professional violinist Carl Schmid, who is part of Jason's backing band, shared photos and video of yesterday's concert and included the following message: "METALLICA was the second band I ever saw when I was a kid-I went to Giants Stadium in New Jersey, where I saw them with GUNS N ROSES and FAITH NO MORE opening the show. My ears are still ringing from that show-it had to be the loudest event I've ever been at. And it was my first taste of Rock N Roll. Until then I was an awkward 13 year old kid playing Mozart and Bach. I came home from that show and told my parents I wanted to be like those guys. They were mortified. A couple years ago, just by a random (or not) coincidence, I got to meet Jason Newsted and he invited me up to his place to play. We played a couple shows together, and then Covid hit. He took a two year hiatus, and then about 4 months ago we got back together.

"Last night was incredible - we played for an oversold out Maltz Theater in Jupiter, and got to raise a whole bunch of money for some deserving kids to attend music school. It was just a few years ago that I came crawling back into recovery with literally a bag of clothes, and very little desire to live, much less play. The gifts I've received, the amazing Grace I've been shown and felt, is just incredible. It's been a pretty challenging month for me, but last night was just another reminder that anything is possible in recovery. Anything."

Earlier this week, Newsted spoke to the 98.7 The Gater radio station about the Maltz Jupiter Theatre concert, saying: "During my COVID downtime, I was in upstate New York. I wrote about 35 new songs during that. I brought it back to my boys. I was sending them the tapes, the demos, sending it up to them to learn them… And that's what we're going to do at the Maltz. We're playing a couple of songs that people are familiar with, inspired by Johnny Cash and stuff, but most of it is all new original music from THE CHOPHOUSE BAND. I'm not playing any acoustic guitar anymore — it's just Les Pauls and SGs and stuff now. Some of it's a little quieter but most of it's not."

Adding that he "loves" singing, Newsted said: "Now since the last time anybody saw THE CHOPHOUSE BAND, we have a vocal group within the band. Now there are four singers in the band. I have two singers from New York — a female and male singer — that are coming down to join us. And so I'm singing eight or 10 songs, and they're singing the rest, but I do background vocals and stuff now. So I can actually really concentrate on playing the guitar and then singing that background stuff. And there's screaming and some [growling] also. So I still haven't lost that. And it lets people know that there's still one foot in that place. You can take the boy out of the metal [but] you can't take the metal out of the boy; it's just the way it's always gonna be. So I'm excited for people to be able to witness what we have been working so hard at. I put a lot — a lot — of energy into these new songs."

Newsted also revealed that THE CHOPHOUSE BAND will enter the studio on May 5 to begin recording its debut album. Asked if he will release the LP himself, Jason replied "yes" before clarifying, "Actually, it's possible — very possible — that I'll be back into the Q Prime fold [METALLICA's longtime management company] with that kind of backing, like a real-deal thing."

Jason previously told the Palm Beach Florida Weekly about THE CHOPHOUSE BAND: "We all get along great because there's not money involved. They've got their own bands, their own families, their own gigs. We do benefit gigs, six a year, and that's it. I record and write and play songs the whole rest of the time. They could all run circles around me musical theory-wise. They could tell you everything they're playing, and all the relating chords. I surround myself with the badasses, and they make me look really good. I'm playing cowboy chords the whole time, and they're doing their fancy shit to make me look good. I just concentrate on singing, and getting across the things I want people to hear."

Metallica was the second band I ever saw when I was a kid-I went to Giants Stadium in New Jersey, where I saw them with... 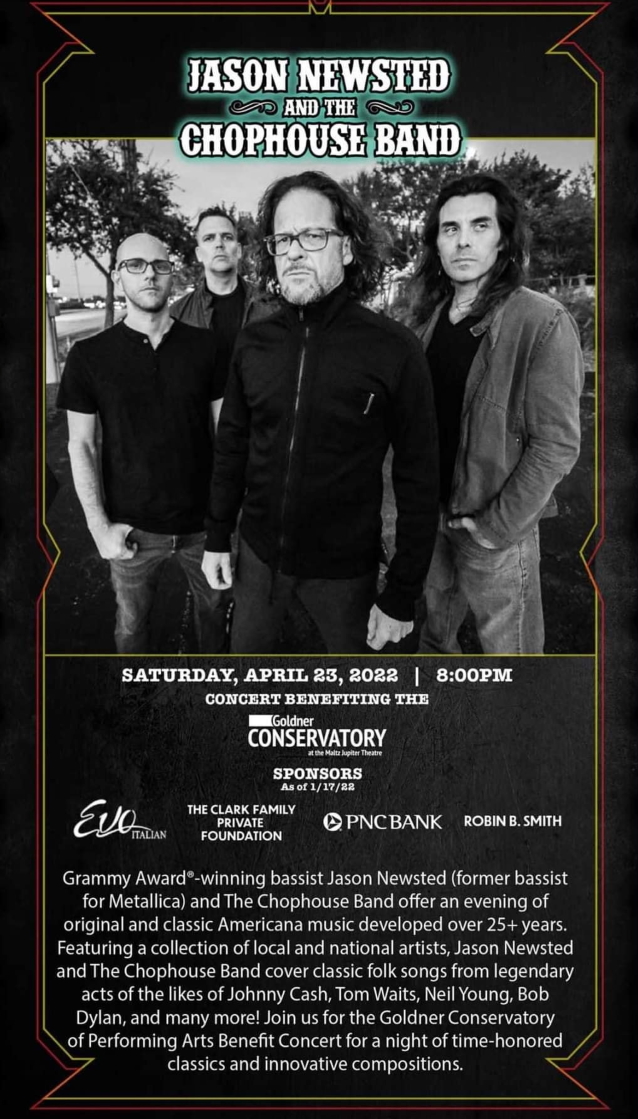