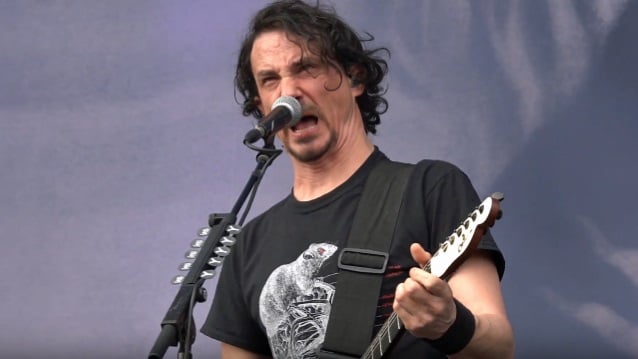 The GOJIRA members discussed why they chose to film the live performance of "Global Warming", a standout track from their acclaimed LP "From Mars To Sirius", in a note to fans.

"A few weeks ago, we played 'Global Warming' together for the first time since the recording of 'From Mars To Sirius' (2004)," the band wrote. "We never played it live before, as it is a challenging one to play and place in a setlist. It's emotionally heavy and would almost 'hurt' the rest of the songs in a way."

The group added: "Global warming is a reality and a relevant topic. We feel it's good to be reminded of one of the most important challenges of our time: How to grow as a species without being a parasite to our planet, the only home we have. 'We will see our children growing' is a mantra for future generations, and in a figurative way, we hope the children in all of us will grow, evolve, and take action for a more compassionate and meaningful world."

This week, GOJIRA will kick off a run of international tour dates and festival performances, which begins with two shows in the band's hometown of Biarritz, France at the Atabal (June 27-28) and continues through early August.

In 2016, GOJIRA's "Magma" staked its claim among the best albums of the year, earning Metal Hammer's coveted "Album Of The Year" title while also landing on Rolling Stone's "Top 20 Metal Albums of 2016," Consequence Of Sound's "Top 50 Albums of 2016" / "Top 10 Metal Albums of 2016" lists, and Pop Matters's "Best Metal of 2016" recap. Additionally, "Stranded", the lead single off "Magma", was named one of Stereogum's "100 Favorite Songs Of 2016." "Magma" also earned GOJIRA their first-ever Grammy nominations for "Best Metal Performance" and "Best Rock Album." GOJIRA's crushing track "Silvera" received a nomination for "Best Metal Performance", while "Magma" was nominated for "Best Rock Album" at the awards.

Last summer, GOJIRA was the support act on a number of North American dates on METALLICA's "WorldWired" tour.