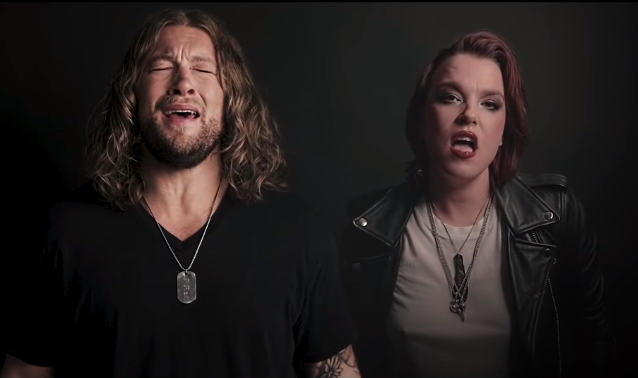 Mixing country music with the hard-hitting stomp of rock and roll, Canadian star Cory Marks makes his debut on Better Noise Music with the release of his album "Who I Am". Also available now is the video for one of the standout tracks on the album, "Out In The Rain", a duet with Lzzy Hale, frontwoman of the band HALESTORM.

"What inspired me to be featured was really Cory's heart; you could really hear that he was speaking from his truth and you could just feel the pain and the purgatory of whatever was happening to him at the time that inspired him to write that song," says Hale. "And my favourite part of the whole song is this conversation that Cory and I are having. It's such a realistic look at love and a couple's journey together. My favorite part is that you can't really tell no matter how many times you listen to it. Are they breaking up? Are they getting back together? Are they just weathering the storm? I think you should decide."

The album also features the global hit "Outlaws & Outsiders", which not only hit the Top 10 at rock radio in the U.S. and Top 12 in Canada, but spent over a month at No. 1 in the UK on Kerrang's Airplay chart as well as being one of the most played tracks on Planet Rock radio of 2020. It is currently at No. 5 at rock radio in Germany.

"Who I Am" was produced by award-winning Kevin Churko (FIVE FINGER DEATH PUNCH, Shania Twain, Ozzy Osbourne) and his son the Juno Award-winning producer, songwriter and engineer Kane Churko (PAPA ROACH, SKILLET). All together, the album consists of 13 songs, including other fan-friendly tracks like "Blame It On The Double", "Devil's Grin", "Better Off" and the latest single, "Drive" — telling stories of heartbreak, hell-raising, and everything in between.

"I'm really excited to finally have this record out! 'Who I Am' tells stories of the last 5 years of my life," says Marks. "The good, the bad and the ugly. The highs and lows of life and I think everyone is going to relate to at least one song on this album. It's a mix of rock, country and a bit of metal. I like to think of it as if Ozzy Osbourne, Merle Haggard and Eric Church created an album it would sound like this. There's nothing out there both in country or rock like this and I'm really proud of that. I hope to steer country music in a whole new direction with this project, turn it up and enjoy!"

"Outlaws & Outsiders" (featuring Ivan Moody of FIVE FINGER DEATH PUNCH, Travis Tritt and Mick Mars of MÖTLEY CRÜE) has over 12 million streams and over 17 million video views globally. It is trending globally on the Shazam discovery charts ranking among the greatest songs of all genres — including songs by BLACK EYED PEAS, Billy Joe Armstrong and G-Easy — illustrating the appeal of country rock music that transcends beyond genre lines. The song is also included in the "sno babies" movie soundtrack, a powerful film that deals with the topic of substance use disorder in the places you would least expect — middle class suburbia. Cory's song "Blame It On The Double" will appear in the soundtrack of another Better Noise Films release, horror spectacular "The Retaliators".

"Growing up on country and rock music — being inspired by songs like THE ROLLING STONES' 'Honky Tonk Woman', bands like DEEP PURPLE and the iconic Ozzy Osbourne, the original outlaws and outsiders Merle Haggard and Waylon Jennings — shaped my musical style. It's a true honor to be working with the country music outlaw of my generation the great Travis Tritt," explained Cory. "He is such a down-to-earth guy and a great pleasure to work with, he's the real deal and I'm very thankful to be working with him".

"I was flattered to be asked to contribute my vocals to the Cory Marks single, 'Outlaws & Outsiders'. I'm excited to see what the future holds for this talented young artist," Tritt explained.