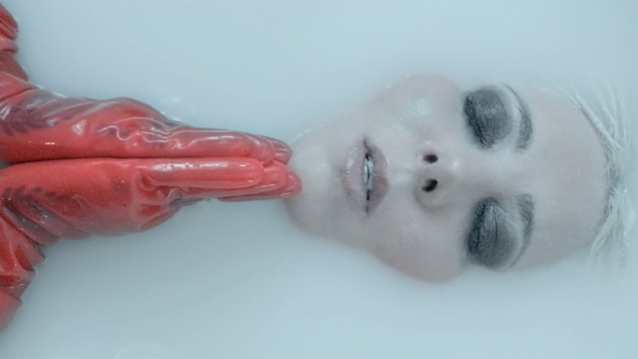 Watch IN THIS MOMENT's Music Video For 'As Above So Below'

IN THIS MOMENT has just dropped the sanguine music video for the song "As Above So Below". The track is taken from the band's latest album, "Mother", which came out in March. Recorded, once again, at The Hideout Recording Studio in Las Vegas, Nevada with producer Kevin Churko, the disc contains three covers, including the STEVE MILLER BAND's "Fly Like An Eagle" and QUEEN's "We Will Rock You", which features vocal backup from HALESTORM's Lzzy Hale and THE PRETTY RECKLESS's Taylor Momsen.

"We are so excited to show the world the magic we created with handsomedevilspuppets and Jeremy Saffer," says IN THIS MOMENT frontwoman Maria Brink. "It was a challenging time to bring a music video together with everything that's been going on, so we had to get creative. We are so thrilled with the outcome and that we had to push ourselves out of our box to manifest this video. We feel grateful to collaborate with other artists and to be able to bring 'As Above So Below' to life for all of you. Enjoy."

Last month, Brink told the Philadelphia radio station 93.3 WMMR that she and her IN THIS MOMENT bandmates were "talking about" hosting a special livestreamed concert for fans amid the coronavirus pandemic. "We're all separated, though, throughout the country — we don't live in the same place — so we're just trying to figure out how's the best way to do this," she explained. "But we definitely are gonna do that, and we're talking about it."