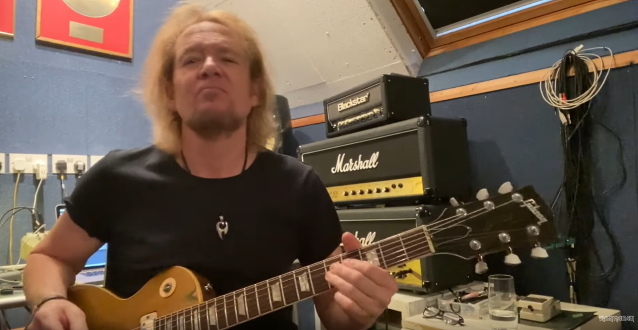 IRON MAIDEN has uploaded a video of guitarist Adrian Smith playing the song "Gangland" for the first time in many years. The track is taken from MAIDEN's 1982 album "The Number Of The Beast", which was the band's first LP to feature vocalist Bruce Dickinson and the songwriting contributions of Smith, who had joined the group two years earlier.

In the clip, Smith introduces his "Gangland" playthrough by saying: "Back in the early with MAIDEN, there was a song called 'Gangland', which is on 'The Number Of The Beast' album. We were rehearsing at a place called Hollywood Studios near where I grew up, actually — for 'The Number Of The Beast' album, we were writing songs there. Clive and I got to rehearsal early — Clive Burr, the drummer with MAIDEN at the time; sadly, no longer with us — and he said, 'Let's do a song this tempo,' and he started playing that drum pattern to 'Gangland'. And I just picked up a guitar, which was, actually, this guitar — I've had it since I was 18 years old; I still use it — and I started playing the music to this. I don't know where it came from. I think Clive was listening to a lot of Cozy Powell at the time, and he loved Ian Paice as a drummer, so I think it was an inspiration from that. And I kind of took inspiration from something that maybe Gary Moore would have done over that drum pattern."

He added: "I'm gonna play it now. I haven't played it for donkeys' years. I've got it on a backing track here. And it might be fun just to go through it and see if I can remember it."

Earlier this year, IRON MAIDEN bassist Steve Harris reflected on the pressure he and his bandmates felt while writing and recording "The Number Of The Beast". "It was the fact that we'd used up the material, pretty much, from the times before that," he told SiriusXM's "Trunk Nation With Eddie Trunk". "Before the first album [1980's 'Iron Maiden'], it was a four-and-a-half-year period before we got signed and all that. And so we had a lot of material that we were doing that was already there, playing in the live set, so we recorded all that. And the second album [1981's 'Killers'] was only, I think, three new songs that were on that album, 'cause the rest of it was stuff we'd been playing [live] as well. So when you get to the third album, it's, like, 'What are we gonna do now?' But that pressure was pretty fierce pressure, and we didn't have a lot of time either. Back in those days, it was just album-tour, album-tour and whatever, and it just worked. So we thought, 'You know what? That worked really well. We'll do the same thing again.' … It has to be done. And if you've got a tour coming after it, that's it — it has to be done."

IRON MAIDEN's latest double live album, "Nights Of The Dead, Legacy Of The Beast: Live In Mexico City", was released on November 20 via BMG. The set was recorded during the band's three sold-out arena shows in Mexico City in September 2019 and is a celebration of the "Legacy Of The Beast" world tour which began in 2018 and will finish next summer in Europe.