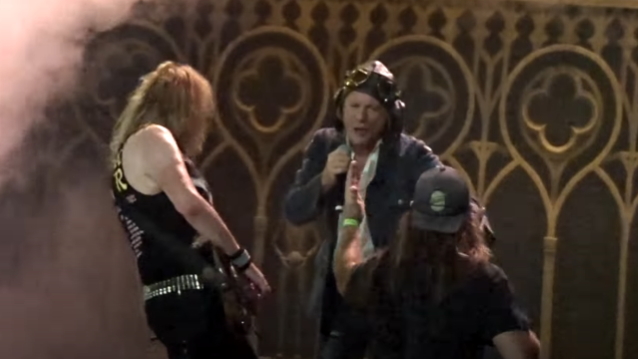 Video of IRON MAIDEN singer Bruce Dickinson physically removing a fan from the stage during the band's concert in Anaheim, California last month can be seen below.

The incident took place on September 22 during the closing song of the show, "Aces High", at the Honda Center. After the aforementioned backwards-cap-wearing fan made his way to the left side of the stage, he dropped down to his right knee and excitedly flashed the devil's horns hand gesture at both guitarist Janick Gers and Dickinson, neither of whom appeared to be thrilled about the stage breach. Bruce then motioned for the fan to come off before grabbing him by his hand and attempting to bring him to the back of the stage. However, the fan apparently had other ideas and proceeded to walk forward toward the center of the stage near where bassist Steve Harris was standing, at which point he removed his cap and began furiously headbanging for the entire crowd to see. This prompted a visibly irate Dickinson to grab him by the back of shirt and forcibly drag him to the back of the stage where he was escorted off by the MAIDEN stage security.

Dickinson has a history of publicly admonishing fans and security at MAIDEN's concerts if he feels like they are out of line. In July, the singer made headlines when he blasted a MAIDEN fan as a "Greek cunt" and a "fucking cocksucker" for lighting a flare during the band's concert in Athens, Greece. Back in 2019, he stopped a MAIDEN show midway through to slam a Tacoma, Washington venue for a violent and bloody incident in the crowd for which he claimed the venue's security was to blame. In 2012, Bruce called out a fan at a Indianapolis show who had been texting for three straight songs.