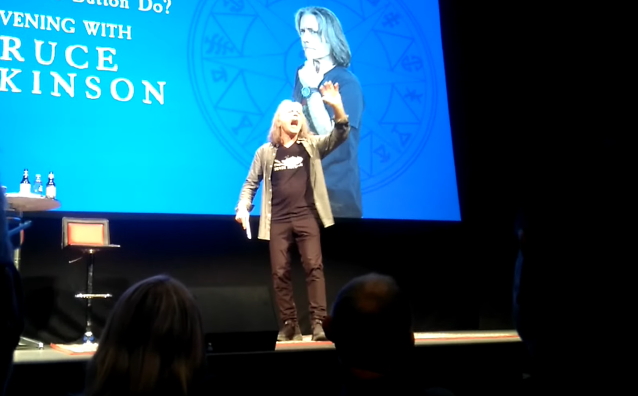 Fan-filmed video footage of IRON MAIDEN singer Bruce Dickinson belting out an a cappella version of the 1968 Tom Jones hit "Delilah" during his August 1 spoken-word show in at Theatre Royal in Brighton, United Kingdom can be seen below.

Dickinson famously covered "Delilah" during a 1997 appearance on the short-lived television show "Last Chance Lottery..." which featured Irish comedian Patrick Kielty calling upon some big names in music business to perform a cover of whatever song was landed on after the host spun the wheel. For his rendition, Dickinson sported a leopard print suit and a spiffy haircut while his backup band wore dark sunglasses and Afro wigs (see video below).

Dickinson, who turns 64 today (August 7),joined IRON MAIDEN in 1981, replacing Paul Di'Anno, and made his recording debut with the band on the 1982 album "The Number Of The Beast". He quit the band in 1993, pursuing several solo projects, and rejoined in 1999.