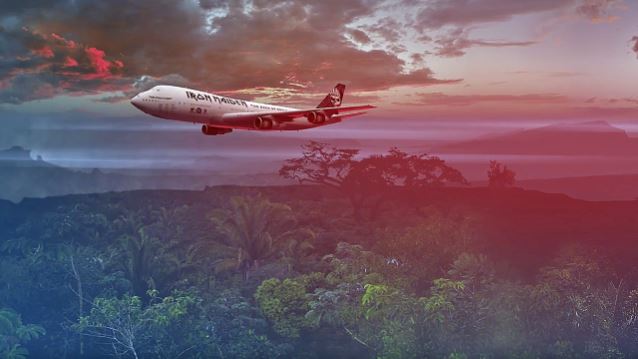 British heavy metal legends IRON MAIDEN debuted their epic new tour intro earlier tonight (Wednesday, February 24) at the kick-off show of their "The Book Of Souls" world tour at the sold-out BB&T Center in Sunrise, Florida. The two-minute clip, which features the band's mascot Eddie and IRON MAIDEN's new-and-improved branded private tour plane, Ed Force One, can be seen below. Also available is the first look at the official MAIDEN tour merchandise that is being sold on the trek.

MAIDEN's sixteenth — and first-ever double — studio album, "The Book Of Souls", was released worldwide on September 4, 2015 through Parlophone Records (BMG in the U.S.A).

"What's special about this tour is that a year ago I didn't even know if I could sing," Dickinson told reporters last week. "We've had an amazing turnaround in fortune after, obviously being ill a year ago, getting rid of that, and getting out and looking forward to doing the tour."

Regarding the fan reception to the new CD and the upcoming tour, Dickinson said: "The album was a massive success, and we were about that far [finger and thumb barely separated] off from getting the No. 1 slot [in its debut week on The Billboard 200 chart]. So now, we get to bring it out to the people, and, I mean, there's a few tickets left but not many. Pretty much the whole of the U.S. is sold out. It's amazing."

Doors open for Iron Maiden with special guests The Raven Age in less than 30 mins! Be sure to check out the merch. tables on your way in.