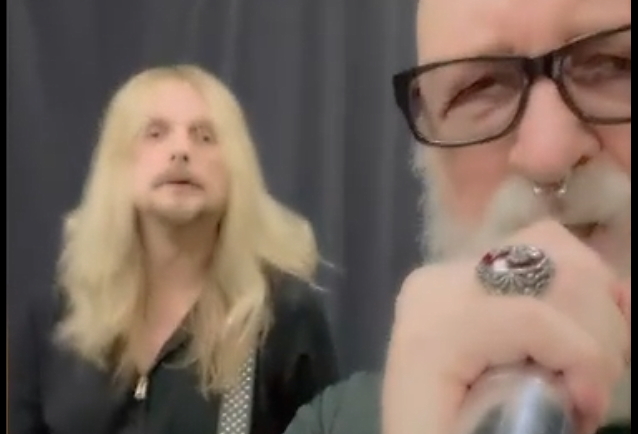 Rob Halford has shared a short video of JUDAS PRIEST rehearsing for its upcoming U.S. tour.

On Monday (February 28),the 70-year-old singer took to his Instagram to post a short clip of him and his bandmates running through a rendition of the PRIEST classic "The Sentinel", and he captioned it: "kicking the metal tires maniacs".

Two days earlier, JUDAS PRIEST's Richie Faulkner, who underwent a life-saving surgery five months ago after the band's performance at the Louder Than Life festival, posted a photo of three of his guitars leaning against an amp, and he included the following message: "And we're back!! PRIEST rehearsals 2022!! Feels so good to be back after so much has happened. Having these US dates has really given me something to aim for as part of my recovery process, and the guitar, as always, has been my medicine throughout.

"It's gonna be emotional to see all those faces out there once again next week and I’m really looking forward to seeing you all. Thanks for all your support through all of this and see you all soon. Hopefully I can remember the stuff!"

On September 26, 2021, the 42-year-old British-born guitarist suffered an acute cardiac aortic dissection during the Louder Than Life performance, just a short distance from Rudd Heart and Lung Center at UofL Health - Jewish Hospital in Louisville, Kentucky. It took the hospital's cardiothoracic surgery team, led by Dr. Siddharth Pahwa and also including Drs. Brian Ganzel and Mark Slaughter, approximately 10 hours to complete the surgery, an aortic valve and ascending aorta replacement with hemiarch replacement.

Two weeks after his surgery, Faulkner, who spent the last few months recovering at home in Nashville, told reporters that he experienced a sharp pain as he was stepping off the stage. "That's when it exploded," he said.

And we’re back!! Priest rehearsals 2022!! Feels so good to be back after so much has happened. Having these US dates has...