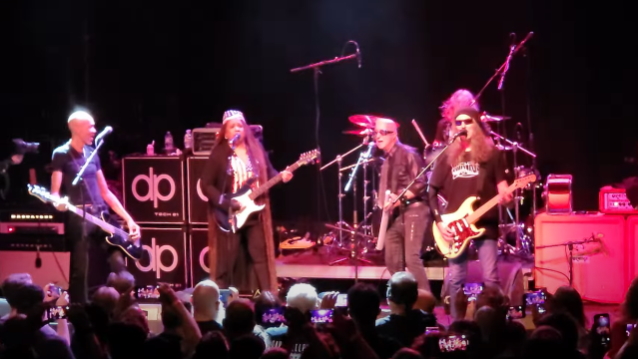 Paul Shaffer, the longtime David Letterman musical director and sidekick, joined KING'S X on stage last night (Thursday, July 28) during the band's concert at New York City's Gramercy Theatre to perform the song "We Were Born To Be Loved", which originally appeared on KING'S X's 1990 album "Faith Hope Love". Also appearing with them was Felicia Collins, who is perhaps best known for her role as lead guitarist for Shaffer's CBS Orchestra on the "Late Show With David Letterman". Fan-filmed video of the performance can be seen below.

Back in the early 1990s, Shaffer reportedly went to a KING'S X show and asked the members of the band on their bus afterward what kind of sampling tech they were using for their vocal harmonies. After they told him "none", Shaffer walked away impressed and taught his band to play "We Were Born To Be Loved". According to the One Week // One Band web site, the song's "fake-out funk-metal coda proved ideal for the Letterman show's commercial bumpers and its regular use provided the band with semiannual royalty checks for years."

Earlier this month, KING'S X canceled its European tour this fall due to "an unforeseen medical issue" with guitarist Ty Tabor.

KING'S X noted that Ty's illness — which requires "vigilant monitoring" — wouldn't affect the three shows the band was scheduled to play in July, as they were the last concerts before his treatments.

KING'S X will release its 13th studio album, "Three Sides Of One", on September 2.

During 2019, the members of KING'S X congregated at Black Sound Studio in Pasadena, California with Emmy Award-winning producer Michael Parnin to bring "Three Sides Of One" to life. Despite consistent touring, they hadn't cut a new LP since 2008. Nevertheless, the guys picked up where they left off. Creative confidant and collaborator Wally Farkas rolled through, and they channeled their chemistry on tape.