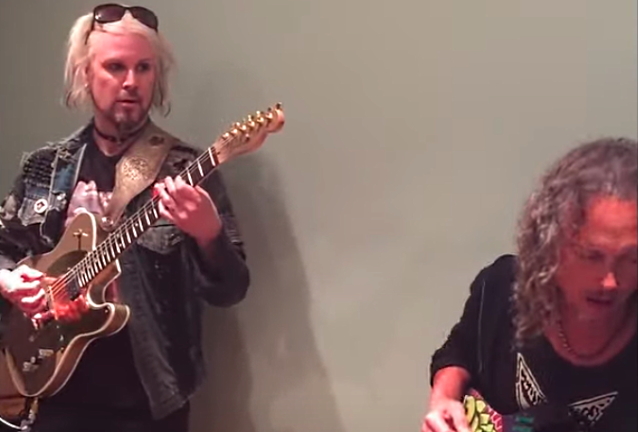 ANTHRAX drummer Charlie Benante has uploaded video footage from the rehearsal sessions for METALLICA guitarist Kirk Hammett's second annual Fear FestEvil, which was held in April 2015 in San Jose, California. The four-minute clip, which can be seen below, features Benante, Hammett and ROB ZOMBIE guitarist John 5 jamming on a cover version of BLACK SABBATH's "Supernaut".

Benante wrote in a caption: "A Fun BLACK SABBATH Jam on the song SUPERNAUT! this was recorded during Kirk Hammett's Fear FestEvil, I love these 2."

In an interview with U.K.'s Classic Rock magazine, Benante named SABBATH's 1972 LP "Vol. 4" as one of the 10 records that changed his life.

He said: "My next door neighbor would play it outside constantly. 'Vol. 4' was always played — all the time. I swear, I knew those songs like the back of my hand.

"Coming from a Catholic upbringing, there was a record store about 15 minutes away from us, and me and my friends used to always go to this place — called Records And Stuff," he continued. "And they used to sell these iron-on shirts. I remember coming home with this BLACK SABBATH shirt that had '666' on it, and my mom freaked out and made me take it back! She would not have it in the house."