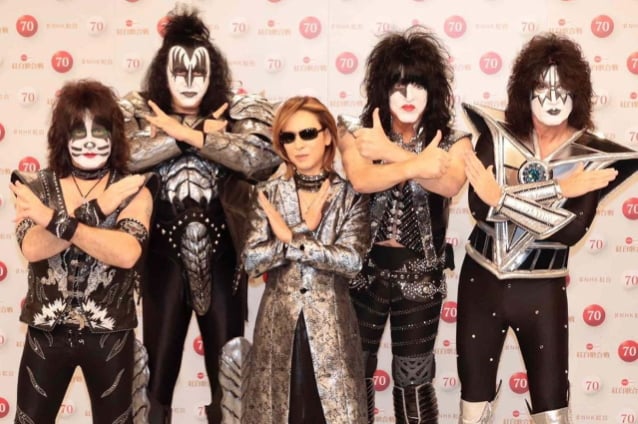 Japanese rock star Yoshiki teamed up with American rock legends KISS for a once-in-a-lifetime television performance on Japan's NHK network. The artists appeared together as "Yoshiki feat. KISS" ("YOSHIKISS") during the New Year's Eve "Red And White Music Battle" ("Kouhaku Uta Gassen"),the most-watched television program in Japan, which is also broadcast worldwide. Video footage of the collaboration can be seen below.

Yoshiki's televised performance with KISS followed his surprise on-stage appearances with the band at Tokyo Dome and Kyocera Dome Osaka during their "End Of The Road" world tour, electrifying the audience with a piano performance on "Beth" and playing the drums on "Rock and Roll All Nite".

Yoshiki worked previously with KISS to create a 72-piece orchestral cover of "Black Diamond" for the 1994 tribute album "Kiss My Ass: Classic Kiss Regrooved". In 2016, Gene Simmons joined Yoshiki on stage to perform "Rock And Roll All Nite" at the Visual Japan Summit in Tokyo.

The New Year's Eve performance marked the first time Yoshiki and KISS have appeared on television together.

"I want us to create a performance that will have a big impact," Yoshiki said prior to the "Red And White Music Battle" appearance. "I think we're really going to shock people."

"It's an honor to perform on NHK in my favorite country in the world," said Gene Simmons of KISS. "Yoshiki is a Japanese legend, but he never forgets to have a humble heart. I've been influenced by his humble approach to his work."

Paul Stanley of KISS also praised Yoshiki, adding, "Not only is Yoshiki a wonderful pianist and drummer, but he continues to express the importance of living and has had a great impact on us."

For Yoshiki, KISS was a life-saving force in his childhood as he dealt with the despair caused by the sudden death of his father.

"KISS saved my life," explained Yoshiki, who studied classical piano throughout his youth and began drumming as a way of releasing his emotional pain.

"Instead of banging things, I started banging drums," Yoshiki said in the X JAPAN documentary film "We Are X". Gene Simmons appears in the film to praise the band which was in fact inspired by KISS. "If those guys were born in America," Simmons said, "they might be the biggest band in the world."

Yoshiki's "Kohaku Uta Gassen" appearance marked his fifth consecutive performance since 2015 as both a solo artist and as leader of the rock group X JAPAN. He defeated Godzilla in 2016, played the drums for the first time following his cervical vertebra surgery in 2017, and made history in 2018 as the first artist to perform on the program for both the red and white teams, appearing as "Yoshiki feat. Hyde" for the "Attack On Titan" theme "Red Swan" and playing the piano with Sarah Brightman on vocals for the chart-topping crossover single "Miracle".