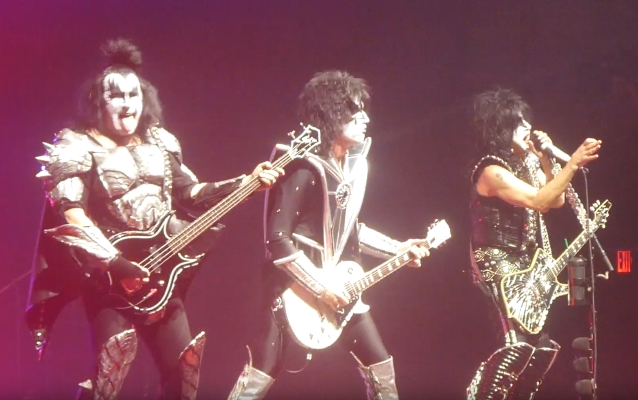 Fan-filmed video footage of KISS's March 22 concert at the Nassau Veterans Memorial Coliseum in Uniondale, New York can be seen below.

In a recent interview with StarTribune, KISS frontman Paul Stanley was asked how he is taking care of his voice on the "End Of The Road" trek, in light of the fact that it has sounded diminished on many recent tours. "I try not to talk to guys like you, for one," Stanley replied. "It's hard to stay away from smoke, because the arenas are filled with it. But I do shut up as much as possible, and try other things.

"There's no denying, whether you're an athlete or singer, that life goes on, and you aren't who you once were," he continued. "That's life. I always say if you want to hear me sound like I did on 'Alive!', go listen to 'Alive!' That said, I have no problem doing what I'm doing and standing by it. The songs sound awesome."

Ever since KISS's "End Of The Road" trek launched in January, there has been persistent online chatter about Paul allegedly singing to a backing tape. The speculation stemmed from the fact that Stanley had been struggling to hit the high notes in many of the band's classic songs for a number of years.

Former SKID ROW singer Sebastian Bach defended KISS against claims that the band is using pre-recorded tracks during its farewell tour, saying that Stanley sang "his ass off LIVE" during a recent concert in California. "I have seen way more obvious use of backing tracks than with KISS," Sebastian wrote.

Most fans assumed that Sixx was referring to KISS, especially since KISS bassist/vocalist Gene Simmons has previously slammed bands who used backing tapes for not being honest enough to include that fact on their concert tickets.

After KISS played on NBC's "America's Got Talent" last September, Stanley was asked by Rolling Stone if that was actually a live performance or if he and his bandmates tracked it earlier. "What you tend to do is record it live and that way you know that everything is as it should be," he responded. "It's not like going into the studio or anything like that. It's… with all its imperfections, it's live."