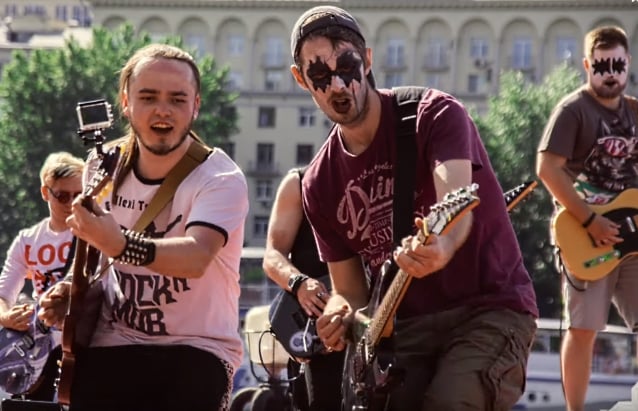 Russian group called ROCKNMOB, which has staged mass flash mobs in Russia covering songs by METALLICA, LINKIN PARK, GREEN DAY, BON JOVI, THIRTY SECONDS TO MARS and others, has put together a group of more than 270 musicians in Moscow to play KISS's "I Was Made For Lovin' You". The clip, which was filmed on May 19 in Gorky Park, can be seen below.

On Saturday (June 29), KISS frontman Paul Stanley tweeted out the video to his 494,000 followers, writing in an accompanying message: "How Cool Is THIS?!?!"

ROCKNMOB was inspired by a 2015 stunt by more than 1,000 musicians in Cesena, Italy, who performed FOO FIGHTERS' "Learn To Fly" in an effort to get the band to play a concert in their hometown. "We were inspired so much by their performance in 2015, that we decided to make it happen in Russia as well," ROCKNMOB explained. "We wanted to express our love to our favorite bands, to invite ones that has not been here for a long time and just to organize a mind-blowing gig. We could not even dream of reaching out such bands as BON JOVI, LINKIN PARK or PAIN, who shared our videos on their official pages. We could not imagine how many supporters we would meet among these bands fan communities and we could not know how many friends we would meet in Brazil, USA, Netherlands, Germany, Finland and other countries!"