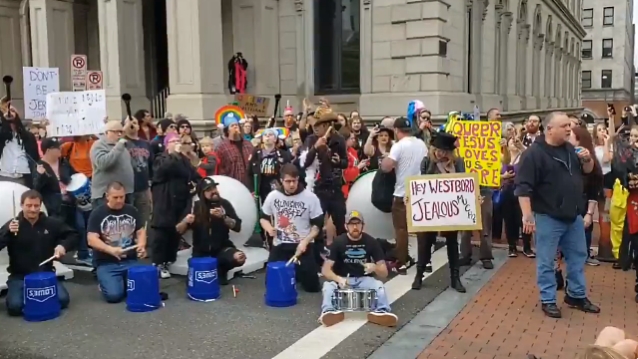 The Westboro Baptist Church, known for inflammatory hate speech and protests against the LGBTQ+ community, the U.S. military, Catholics, Jews and Muslims, was in Virginia's capital to protest the election of Danica Roem, the state's first openly transgender elected official.

Blythe shared his plans on Instagram for a counter-party rather than a counter-protest, explaining that he was "not interested in arguing with these morons, getting upset" or "yelling at them." Instead, what he wanted to do is have "a good time at their expense."

Randy posted a call to action asking Richmonders to join him and play kazoos to drown out the group. He was also offering a $100 cash prize to the counter-partier with the best costume.

About six members of the Westboro Baptist Church attended and stayed for about a half hour beginning just before 9 a.m. They were drowned out by a couple of hundred metalheads with kazoos, which were handed out for free.

In an e-mail to StyleWeekly.com, Randy elaborated on his motives for staging the event, saying: "Why bother throwing a kazoo counterparty when the loonies of the Westboro Baptist Church show up? Well, first and foremost, Danica is my friend. I don't like people who mess with my friends. Second, their 'message' sucks — they do have the right to preach it, but we also have the right to drown it out with kazoos. Third, it's too good of an opportunity to pass up. Who doesn't want to hear a few hundred people playing the 'Sanford & Son' theme on kazoos? Only a truly godless and un-American puppy-kicking troglodyte, that's who.

"Why let a perfectly good chance for some harmless and hilarious mischief pass by? Some people say: 'Just ignore them, you're only giving them more publicity to raise money with.' I disagree. From the Southern Poverty Law Center website: 'Fred Phelps and his small congregation provide WBC's funding; the group neither solicits nor accepts outside donations.' Phelps is dead and gone, but many members of this 'church' are lawyers, and they fund their activities from lawsuits — someone loses their cool and punches one of them, and then they sue the pants off of the aggressor. Or a city won't let them protest, and then they sue the city. This has substantially increased their coffers several times.

"So let them come with their signs and nonsense. As long as everyone remains cool, ignores these mental cripples, and plays ripping kazoo tunes, then all the Westboro Baptist will have accomplished is burning some of the funds in their travel bank account."

Roem is also a longtime lead singer of a metal band called CAB RIDE HOME, which released its debut album, "Crash The Gate", in 2017.

In November 2017, Democrat Roem, a former journalist for the Montgomery County Sentinel and a lifelong resident of Manassas, Virgina, defeated Republican Bob Marshall, who is known best for his socially conservative views, including his vehement opposition to LGBT rights.

Roem outraised Marshall 3-1 with nearly $500,000 in donations from all over the country, much of it coming from national LGBT groups and other progressive organizations.

Roem, who was three years old when her father, John Paul Roem, took his own life, began her physical gender transition in 2012. Three years later, she legally changed her first name from "Dan" to "Danica."

"Just because I sing in a heavy metal band while spinning my head in circles and getting paid to do it, why can't I run for government? Why would I have to change who I am in order to run for government? I've already had to go through transformative change," Danica told Noisey in June 2017.

Watch the FULL VIDEO here on my IGTV. Tomorrow, 9 AM, 1000 Bank St, Richmond VA. $200 cash prize for best costume! We will have at least 200 kazoos to give out & various other melodious party-enhancing devices. Get there by 8:45 AM at the latest! My friend @dargott (director of the “As the Palaces Burn” documentary) is sending out a small film crew to document this EPICNESS. Remember, not matter what kind of offensive things they say- DO NOT ARGUE OR ENGAGE IN ANY WAY with the buffoons of the #westborobaptistchurch- that’s what they want. We’ll just drown them out instead. What if they don’t show? I don’t cancel parties because unwanted jerks don’t show up- there will still be a #kazoo #champagnejam & CASH MONEY for best costume. See y’all there! #kazoo #counterparty #westborobaptistchurch #beatitkooks

I somehow ended up up Randy Blythe’s protest against the Westboro Baptist Church 🔥 pic.twitter.com/CNbhwBAs2P

@hEnereyG hopefully this is a good start to your day. Randy Blythe from lamb of god organized a counter party to the Westboro Baptist Church today in Va. this is the result. pic.twitter.com/kN5MAcdkHG

The noise level is nothing compared to real life. Westboro Baptist Church’s boombox can’t be heard over this kazoo party. @theCTpic.twitter.com/42kjsCdvBF

Big shoutout to Randy Blythe of @lambofgod and all the supporters today who held a counter protest so big and loud the Westboro Baptist Church called it quits 10 minutes early. pic.twitter.com/tOIYeZBvii

A “friendly” goodbye to the Westboro Baptist Church. pic.twitter.com/PHOg8Wzeax