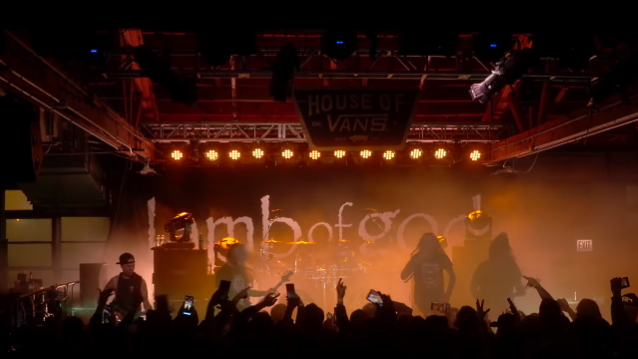 LAMB OF GOD played a special show last night (Friday, February 14) at the House Of Vans in Chicago. The free event included a photography exhibit featuring photos from singer Randy Blythe that will be included in the artwork for LAMB OF GOD's upcoming self-titled album.

LAMB OF GOD's performance at the House Of Vans was streamed live via YouTube and can be seen below.

"Lamb Of God" will be released on May 8 via Epic Records in the U.S. and Nuclear Blast Records in Europe. The follow-up to "VII: Sturm Und Drang" will mark LAMB OF GOD's first recordings with Art Cruz, who joined the band last July as the replacement for the group's founding drummer, Chris Adler.

Blythe told U.K.'s Kerrang! magazine that "Checkmate", the first single from the band's upcoming album, is "the most on the nose politically, but this whole record is political. There's not a single song [on the album] about an individual," he explained.

"When we had [George W. Bush] during the [2004 album] 'Ashes Of The Wake' era, he was a whole lot easier to write specifics about because we had the war in Iraq, the mythical weapons of mass destruction, but right now, the political world everywhere looks like Peewee Herman's playhouse.

"They are two sides of the same coin," he continued. "Civility and discourse is at an all time low, and that's because people view political parties now not for their policies, but they support these different parties like sports teams. The lyrics reflect that. The system is a fucking fraud."

LAMB OF GOD and MEGADETH will join forces on a co-headline tour across North America this year, presented by SiriusXM. Support on the trek will come from TRIVIUM and IN FLAMES.

The 55-date tour will be split into two legs, the first of which kicks off June 12 at Jiffy Lube Live in Bristow, Virginia, and wraps August 1 at the Concord Pavilion in Concord, California. The second run launches October 2 at iTHINK Financial Amphitheater in West Palm Beach, Florida, and runs through November 13 at the Reno Events Center in Reno, Nevada.