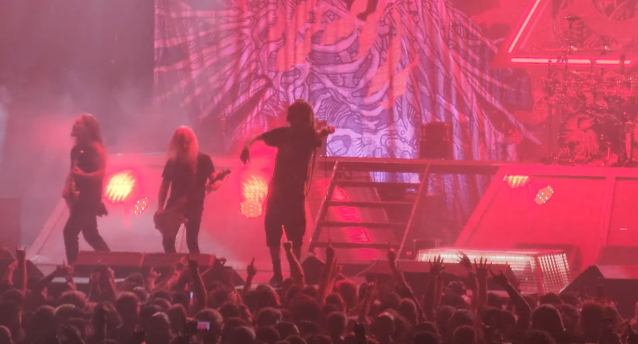 Earlier today, Demmel shared a photo of the Vancouver gig and included the following message: "A 24 hour Canadian LoG Vacation has ended a pretty crazy weekend. Thanks again to the band and crew for having me along with them. Good seeing @joebad and @jesse_d_leach do their thing and having the wife there meant everything. What's next?!?!?!?"

Willie played with LAMB OF GOD on Friday, October 7 at the Aftershock festival in Sacramento, California and is expected to rejoin the band for tonight's (Monday, October 10) show in Kent, Washington.

Demmel previously filled in for Adler on nearly a dozen European LAMB OF GOD shows in August. Prior to that, Demmel stepped in for Adler during LOG's January appearance on the ShipRocked cruise and in May for the Canadian portion of LAMB OF GOD's "The Metal Tour Of The Year" with MEGADETH.

In April, Demmel also filled in for Campbell when the bassist had to miss a couple of shows on "The Metal Tour Of The Year" in order to "take care a family matter back home."

Last month, LAMB OF GOD bassist John Campbell told Australia's "Scars And Guitars" podcast that Adler is "absolutely" still a member of LAMB OF GOD. "Yeah. Willie has always been in the group," he said. "We have all had situations happen where we had to not be on tour when the band had stuff going on because of stuff happening that we needed to take care of. Willie is one thousand percent in the band. We are lucky to have Phil Demmel available to step in when needed.

"That's the first time I've been asked that, so I'm a little taken aback," Campbell admitted. "But, yeah, Willie is absolutely in the band. We had soundcheck earlier. We were on stage right together playing tunes."

At last month's Bloodstock Open Air festival, Demmel was asked by TotalRock if Willie's COVID-19 vaccination status is the reason Phil has been stepping in for the LAMB OF GOD guitarist at some of the recent shows. He responded: "I think Willie's just in a spot right now, and it's not really my spot to say, but I get the vibe that he's… I don't even think I should talk about it. I don't think it's my spot to say anything about Will. But he's making his decisions, and I am the contingent. So here I am."

LAMB OF GOD singer Randy Blythe discussed Demmel's involvement with the band during an interview with Bloodstock TV's Oran O'Beirne. After O'Beirne noted how talented Demmel is to be able to step in on a moment's notice, Blythe said: "We make him put in work, though, to be fair. The guitar parts aren't easy. We are playing a song tonight, 'The Faded Line', and that's a song that hasn't been in our set for a while because some guys are, like, 'Oh, this is hard.' And it's, like, 'No. We need to do this.' And even he was just, like, 'Oh. We've gotta learn that. That's a fucked up riff.' But we saw Phil fill in for SLAYER on, like, two days' notice in Europe at the end of the SLAYER tour, 'cause Gary Holt's dad was passing away. R.I.P. And Phil came over and killed it. We've known him for many years. There's never really been any question of whether he can do it. He's a phenomenally talented guy." 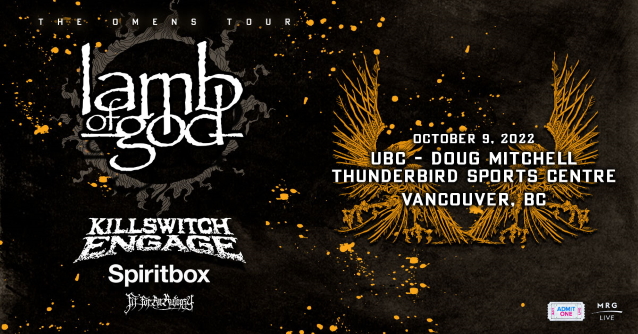