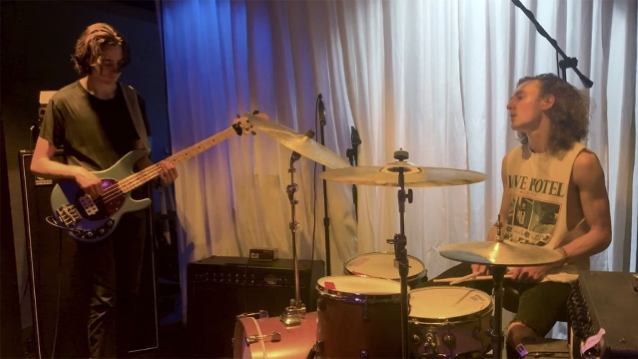 Lars initially wanted to end his interview by playing a song himself, but he couldn't figure out the right piece for the occasion. "I'm like, 'Nobody wants a fucking drum solo,'" Ulrich told Rolling Stone. "It's just kind of not the right moment for that type of thing."

Eventually, he asked Myles and Layne, who were home from NYU for the rest of the semester because of pandemic-related shutdowns, if they wanted to record something. Thirty minutes later, they were ready to present their take on THE BEATLES classic.

Myles, 21, has been playing drums for years while 19-year-old Layne plays both guitar and bass.

"It just feels like there's increasingly less and less madness and unpredictability in music," Lars added. "And when I see that clip, it just feels like, holy fuck, it's like a moment. If they can bring that out to the world and not have it be too watered down or overproduced, then that's certainly promising for what could come."

Four out of five North American festivals that METALLICA was supposed to headline in 2020 — Epicenter in Charlotte, Welcome To Rockville in Daytona, Sonic Temple in Columbus and Louder Than Life in Louisville — have been canceled. The fifth, Sacramento's Aftershock event, is as of now still scheduled for October.

The band's South American tour, which was originally planned for April, has been postponed until December.