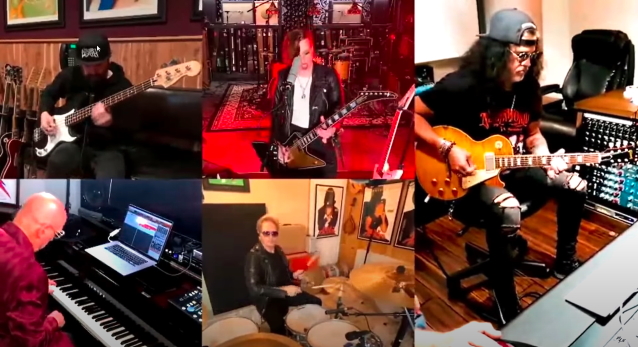 The video below contains performances of two songs: a rendition of THE BEATLES classic "Come Together" featuring Lzzy Hale, Linda Perry, Slash, Gilby Clarke, Mike Garson, Rob "Blasko" Nicholson and Matt Sorum; and a version of AC/DC's "It's A Long Way To The Top (If You Wanna Rock 'N' Roll)", as performed by Lzzy Hale, Robin Zander, Gilby Clarke, Rob "Blasko" Nicholson and Matt Sorum.

With (De)Tour, Morrison Hotel Gallery took the new normal to the next level, offering patrons all-day, unlimited access to YouTube Live streamed performances of festival headliners. Stars delivered intimate performances from their own homes, as well as stunning shows from the otherwise vacant stages of legendary music venues throughout the nation, including New York City's Bowery Electric, West Hollywood's Whisky a Go Go, The Roxy Theatre, and the Viper Room — with numerous surprise stops and celebrity guests along the way. (De)Tour was hosted by Spotify global head of rock Allison Hagendorf and famed MTV/VH1 personality Matt Pinfield.

An all-access experience tailored for music fans, (De)Tour was created to honor and assist music’s unsung heroes. With no cost for admission and donations accepted in real time via YouTube Live and Facebook Live, Spotify matched donations to MusiCares dollar-for-dollar up to a collective total of $10 million through its COVID-19 Music Relief project, with all proceeds being split between MusiCares and NIVA. Spotify also created a special (De)Tour playlist featuring songs from the performers.

The Recording Academy and its affiliated charitable foundation MusiCares established the COVID-19 Relief Fund to help their peers in the music community affected by the coronavirus pandemic. While The Recording Academy is best known for the Grammy Awards telecast, it serves the music community year-round by providing emergency aid through MusiCares, as well as performing advocacy work to protect musicians’ rights.

Formed in the days following the shutdown, NIVA works to preserve and nurture the ecosystem of independent live music venues and promoters throughout the United States. Independent venues exist in every state across the country. They were the first to close, have zero revenue, enormous overhead, and there’s no view into when they can reopen. When surveyed, 90% of NIVA members reported that if the shutdown lasts six months or longer and there’s no federal assistance, they will be forced to shutter forever. To enable their 2,500 members' survival, NIVA is advocating for the passage of the bipartisan Save Our Stages Act and RESTART Act. People can contact their elected representatives through SaveOurStages.com to ask them to support these bills.

Morrison Hotel Gallery is the world's leading brand in fine art music photography representing over 125 of the world's finest music photographers and their archives. Their vast catalog of photography encompasses jazz, blues, and rock imagery spanning several generations through to today's contemporary music artists and now includes iconic photographs in the world of celebrity and sports as well. MHG has a robust online presence, featuring over 100,000 images searchable by photographer, music artist, band or concert.