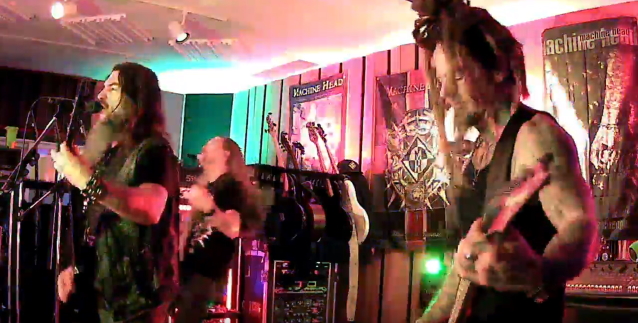 MACHINE HEAD recently completed work on a new full-length album for a tentative summer release. The follow-up to 2018's "Catharsis" will include the three songs that were featured on last summer's "Arrows In Words From The Sky" single: "Become The Firestorm", "Rotten" and "Arrows In Words From The Sky". Much of the new MACHINE HEAD LP was recorded at Sharkbite Studios in Oakland, California with producer Zack Ohren.

In November 2020, MACHINE HEAD released a single, "My Hands Are Empty", via Nuclear Blast. The song marked the first musical collaboration between Flynn and Mader in 24 years.

All of the album's tracks, like openers and live set staples "Ten Ton Hammer" and "Take My Scars", through to album closing tracks and mega deep cuts "Blistering" and "Blood of the Zodiac" are given the Electric Happy Hour treatment in a not-to-be-missed show.

Rounding out the show, the boyz jammed through six tracks from their classic debut album, "Burn My Eyes", making this a perfect setlist for fans of the earliest era of the band. Again, this is an Electric Happy Hour not-to-be-missed!!