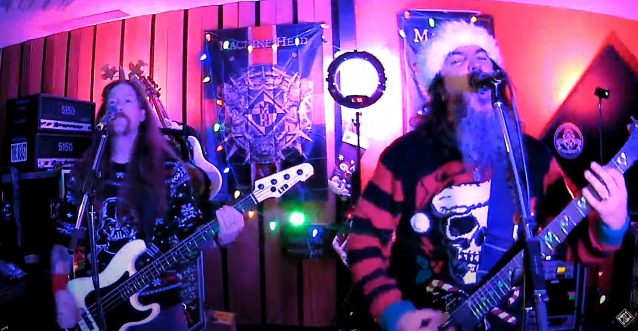 MACHINE HEAD's Robb Flynn and Jared MacEachern held the latest "Electric Happy Hour" earlier today (Friday, December 17) during which they performed a "handful" of METALLICA covers — including "For Whom The Bell Tolls", "Damage, Inc." and "No Remorse" — in honor of the legendary band's 40th anniversary. You can now watch the session below.

Back in 2011, Flynn spoke to Revolver magazine about how MACHINE HEAD got to open for METALLICA on the "Death Magnetic" tour. "To me, one of the raddest things in the world was touring with METALLICA and watching 'Master of Puppets' — not 'Enter Sandman'," he said. "I get why 'Enter Sandman' is so frickin' huge, but to watch 'Master Of Puppets', this eight-minute song with a million parts in the middle of it with complicated choruses and off-time rhythms, to watch arenas every night sing every fuckin' word, that was amazing. There's this whole other part of music that can be well-written and well-constructed that can be somewhere over here [points away from him] and still translate to millions of fuckin' people.

He added, "It's amazing to see how passionate those dudes still are about music. They don't have to give a shit about music at this point. They don't have to care about other bands. They're fucking METALLICA. But there were times when I'd sit there and talk to Lars [Ulrich] or [James] Hetfield and listen to them geek out on a band. Lars and I went and saw THE SWORD, and he's singing every word and doing air guitar to all the right parts. I'm like, 'You know every fucking word to THE SWORD's songs?'"

Flynn also spoke about having one of his musical idols, James Hetfield, join MACHINE HEAD on stage on May 16, 2009 and May 17, 2009 in Oberhausen and Cologne, Germany, respectively, to perform the song "Aethetics Of Hate", taken from MH's 2007 album, "The Blackening". According to Robb, the jam came about when Hetfield walked into MACHINE HEAD's dressing room and the two started talking. When Hetfield noticed there was an electronic drum kit set up in the corner of the dressing room, Hetfield took a seat behind the kit.

"He said, 'Do you know any 'TALLICA?'" Flynn said. "I'm like, 'Do I know any METALLICA?! Fuckin' call it.' So we did 'Master Of Puppets'. Then he goes, 'Do you know any MAIDEN?' And I'm like, 'Fuckin' 'Wrathchild'. And then I realize, 'Oh my God, I'm jamming with Hetfield and he's on the fuckin drums, playing it killer.' Then he says, 'Let's jam [MACHINE HEAD's] 'Aesthetics Of Hate'.' I'm like, 'You know 'Aesthetics Of Hate' on the drums?' He knew every fuckin' drum beat, every part, and that ain't an easy song to play. While we're playing, Dave [McClain, then-MACHINE HEAD drummer] comes in and goes, 'He's playing my drum parts. This is amazing!' To see a band at that level and think, 'Wow, man, those dudes are still fans. They still love music' is kind of a revelation. But I mean, I don't know why I didn't know [they still loved metal]. I think I might have thought they'd be different now because they're huge and they're METALLICA."