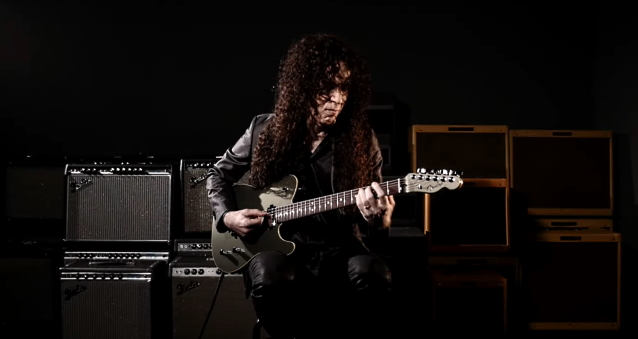 Fender's Japanese division has uploaded a video of former MEGADETH guitarist Marty Friedman playing one of the instruments in the guitar manufacturer's "Made In Japan Modern Series". The range is comprised of seven new models based on classic Jazz Bass, Jazzmaster, Stratocaster and Telecaster shapes.

Earlier in the month, Friedman released a "Home Jams" version of his song "Self Pollution", which originally appeared on the 2017 album "Wall Of Sound". The new rendition of the song features Friedman, along with his longtime bandmates Kiyoshi (bass) and Jordan Ziff (guitar),plus Anup Sastry (drums). The split-screen video was filmed in Tokyo, Osaka, Phoenix and Baltimore, with each musician separated in his or her home.

"Wall Of Sound" was released in August 2017 via Prosthetic Records. Produced by Friedman, engineered by Paul Fig (GHOST, RUSH, ALICE IN CHAINS) and mixed by Jens Bogren (KREATOR, OPETH, SEPULTURA),the disc "expands and destroys any conventional notions of instrumental music," according to a press release. Legendary QUEEN producer Mack came on board to handle the mixing on two tracks, "Streetlight" and "For A Friend", which Friedman proclaimed was "an honor for me, for sure."