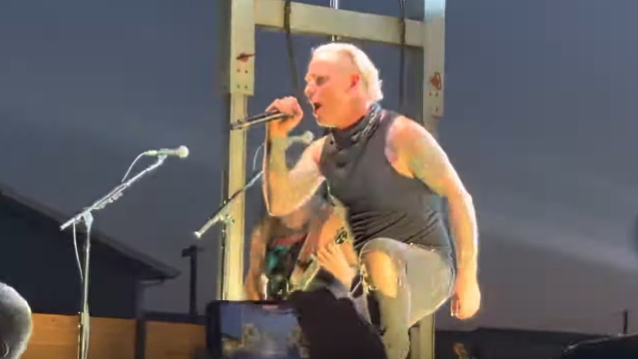 Corey Taylor performed the classic SLIPKNOT song "Wait And Bleed" live with his solo band for the first time this past Thursday (August 12) at Fargo Brewing Company in Fargo, North Dakota. The SLIPKNOT and STONE SOUR singer also played the track the following night (Friday, August 13) at The District in Sioux Falls, South Dakota. Fan-filmed video footage of both concerts can be seen below.

"Wait And Bleed" was the lead single from SLIPKNOT's self-titled debut album, which came out in 1999. The song was written by Taylor and SLIPKNOT's founding drummer Joey Jordison, who passed away last month. Jordison told Kerrang! about the track: "I wrote the music for 'Wait And Bleed' on my own… I showed it to the guys at rehearsal, and then Corey wrote some lyrics really fast in our practice space… He took us to a new level immediately." Taylor added about "Wait And Bleed"'s lyrical theme: "The song's about that switch in your head that can go at any moment. You go from being a civilized human being to someone who can commit terrible acts. I've always been fascinated by the fact we represent ourselves as civilized when, at any moment, we can become animals."

Taylor, who plays his solo shows without SLIPKNOT's trademark masks and coveralls, told Ireland's Overdrive in a 2019 interview that he couldn't see SLIPKNOT ever going unmasked. "It's such a part of our art," he said. "It's also part of the reason why we change the masks with every album. Unlike KISS, they have always used the same makeup and it never evolved. For us, we've changed with every album and not only the masks but also the outfits. You can totally tell every album by the uniform. I think things like that have kept SLIPKNOT relevant, it's kept the music vibrant, it's kept the live shows different and it's kept us from stagnating. So, no, I could never see us losing the masks. If we ever got the notion to do SLIPKNOT unmasked, I think I'd be, like, 'Well... eh, no.' We are all in our 40s now and we still very much have a love/hate relationship with what we do but every time we step on stage, we're absolutely prepared to give it everything we've got. So, for me, personally, when that feeling stops, when we start trying to cut corners and try to make things easier, just so we can 'get on with it,' that's when it's gonna be time to call it a day."

Taylor kicked off his "CMFTour" summer 2021 tour on August 6 at the House of Blues in Las Vegas, Nevada. The trek features special guests CHERRY BOMBS, led by Taylor's wife Alicia Taylor, on all dates. The shows find Taylor and his band running through anthems from his critically acclaimed solo debut "CMFT", choice cuts from his SLIPKNOT and STONE SOUR catalogs, and various covers and surprises.

2021 has been as busy as ever for Taylor. Having recently wrapped the sold-out spring leg of his "CMFTour", which he documented in a series of "Tour Diaries" for Rolling Stone, Taylor also recently released an inspired new cover of CROSBY, STILLS, NASH & YOUNG's "Carry On" and fronted GROUND CONTROL, a supergroup also comprised of Taylor Hawkins (FOO FIGHTERS),Dave Navarro (JANE'S ADDICTION) and Chris Chaney (JANE'S ADDICTION) performing at "The Bowie Celebration: Just For One Day" in tribute to the late David Bowie.