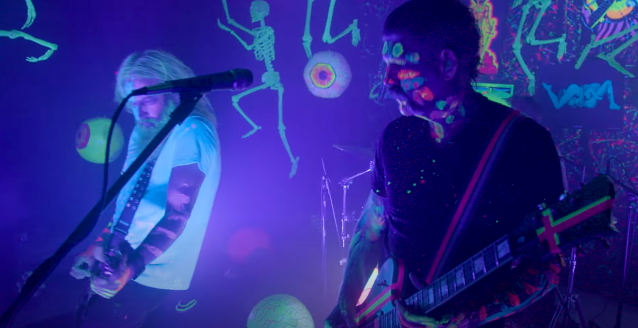 Atlanta progressive metallers MASTODON played a short set at the virtual Adult Swim Festival on Friday night (November 13). The five-song performance, which can be seen in full below, kicked off with the live debut of the "Once More 'Round The Sun" track "Asleep In The Deep", before continuing with "Thickening", "Steambreather", "The Motherload" and "Blood And Thunder".

MASTODON has just entered the studio to begin recording its next album. The follow-up to 2017's "Emperor Of Sand" will mark MASTODON's first collection of new material since the death of longtime manager Nick John and the passing of tour manager Bob Dallas.

MASTODON drummer Brann Dailor recently told the 100.3 The X Rocks radio station that the band had demoed 30 songs for its next LP, with the intention of including 12 on the final product.

"Bill & Ted Face The Music", which reunites Alex Winter and Keanu Reeves in the title roles for the first time since 1991's "Bill & Ted's Bogus Journey", was released in August.