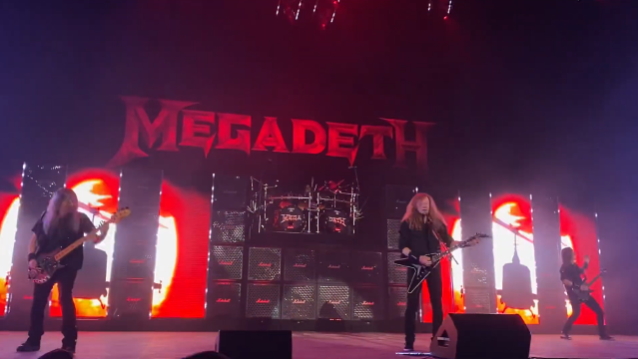 Watch: MEGADETH Kicks Off 2022 Leg Of 'The Metal Tour Of The Year' In Las Vegas

MEGADETH kicked off the 2022 leg of "The Metal Tour Of The Year" with LAMB OF GOD, TRIVIUM and IN FLAMES last night (Saturday, April 9) at Michelob ULTRA Arena in Las Vegas, Nevada.

Fan-filmed video can be seen below.

The 2022 leg of "The Metal Tour Of The Year" will hit a further 21 cities before wrapping in Allentown, Pennsylvania on Sunday, May 15.

Last month, MEGADETH bassist James LoMenzo discussed the band's setlist for the 2022 leg of "The Metal Tour Of The Year" during a bassist roundtable video chat with Knotfest's Ryan J. Downey. "You have to take into account that Dave's [Mustaine, MEGADETH frontman] been through a lot with his voice, so a lot of the songs that we pick are predicated on [the fact] that he is healing correctly," the bassist said at the time, referencing Mustaine's recent battle with throat cancer. "So that's part of it as well. But it's a long road ahead. We're always swapping in songs. We've got a whole pile — they're all sitting, waiting to be let loose. That's the great thing about being in this band, is that there's just an inexhaustible catalog.

"I don't know how to say this delicately, so I'll just say it. The truth of the matter is when you go to see a lot of your favorite bands — let's be the fan guy; okay, let's go to see our favorite band… I remember when JUDAS PRIEST was doing all of 'Nostradamus'," he continued. "It was a good record, but it wasn't 'Hell Bent For Leather'. And I've gotta say that people wanna hear the songs that they love. Why wouldn't you play them for 'em?

"So that's the problem with a band like MEGADETH," James added. "And there are bands, as we move along — all bands, as you move along, you start just getting this giant catalog. And how do you get enough in there to give the core fans what they really want as opposed to the esoterics? You try and throw a thing here and there, but you've gotta keep the hits, man."

Megadeth - Dread and the Fugitive Mind [Live In Las Vegas, 2022]

Megadeth - Dread and the Fugitive Mind [Live In Las Vegas, 2022]

Posted by Megadeth of Destruction on Sunday, April 10, 2022

THE METAL TOUR OF THE YEAR II kicks off in Las Vegas, Saturday, April 9. See you there 💥💥💥 metaltouroftheyear.com